Home Film Film Reviews Violation
SHARE
Facebook
Twitter
Anthony Minghella made his name as the director of lush, cosmopolitan, epic literary adaptations with period settings, beginning with The English Patient in 1996 and continuing through The Talented Mr. Ripley and Cold Mountain. 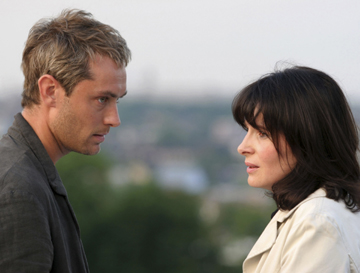 These were all respectable films, even if The English Patient was absurdly overrated, but none of them had anything like the warmth, insight, and good humor of his gemlike 1991 supernatural romance Truly, Madly, Deeply. While he was doing all those Oscar-bait pictures, I kept wishing that he’d go back to making a small, character-driven movie like that one. His latest film, Breaking and Entering, is just such a return. The lesson for me is: I should be careful what I wish for. For, you see, Breaking and Entering is little more than a tepid British version of Crash, and that’s a movie we so did not need. This sleek contemporary drama tries to comment on some big issues in addition to analyzing domestic situations and relationships among a multitude of characters in various strata of English society. What a shame, then, that all of Minghella’s considerable efforts amount to a movie that plays like it’s wrapped in several layers of cotton. Jude Law portrays Will Francis, the co-founder of a struggling architectural firm whose office is located in the crime- and drug-infested north London district of King’s Cross. The British government wants to revitalize the area — this is true in real life, by the way — and Will’s grand plan is to turn King’s Cross into a sparkling retail paradise centered on a walkway along the river. The urgency of his work is brought home when his office is repeatedly broken into and burglarized. The culprits turn out to be a group of Bosnian mobsters who rely on the gymnastic skills of an adolescent boy named Mirsad Simic (Rafi Gavron) to get inside the building. After spending a few nights staking out the office, Will manages to catch Mirsad in the act and follow him to his mother’s apartment.

The movie’s climax hinges on whether Will can save Mirsad from a life of crime, but this part of the story flops badly because the teen is never convincing as a character. He’s stubborn and uncommunicative, as boys that age tend to be, and we’re supposed to believe that he’s salvageable because he can turn back flips and shares Will’s interest in architecture. In fact, after stealing Will’s laptop, Mirsad views the files containing the urban renewal project and is so taken with them that he burns them onto a disk before erasing them, then leaves the disk on Will’s desk during a subsequent break-in. This is a hopelessly naïve way of showing that this kid has beauty in his soul despite living in poverty, and it’s typical of Minghella’s failed attempts to humanize the many expat characters in his movie. Too often they turn out as broad caricatures; the Ukrainian prostitute who chats with Will during his stakeouts (The Departed’s Vera Farmiga) is so badly conceived and written that she’s downright embarrassing. If you’re looking for a movie that deals with Britain’s relationship with its immigrants, you’re better off seeing Children of Men.

There’s a romantic subplot that’s supposed to provide a framework so that we can better understand the film’s issues, but it only serves to muddy things. Will’s Swedish wife (Robin Wright Penn) has put a successful filmmaking career on hold to take care of her 13-year-old daughter from a previous marriage (Poppy Rogers), who is severely mentally ill. Feeling excluded from his own family, Will winds up having an affair with Mirsad’s mother Amira (Juliette Binoche), a Bosnian Muslim refugee who earns money by sewing clothes from home. The French actress is woefully miscast, yet in playing a character who’s improvising her way through a precarious existence, Binoche manages to come across as believably messy. That’s a huge accomplishment in a film where every plot twist is so unbelievably neat, and where every emotional meltdown is placed so meticulously within the story that it loses impact. Minghella doesn’t help matters by hammering insistently on the theme that these characters are trying to break through someone else’s defenses and establish a connection. Just like in Crash, this movie’s title serves as a cheap, obvious metaphor as well as a reference to literal events. At least we can be thankful that Breaking and Entering is too well-mannered to descend to the earlier movie’s tawdry “we’re all racists” rhetoric. Yet it’s also too well-mannered to give us anything in the way of dramatic fireworks, and despite a few moments that ring true, it’s too clumsily written to be the delicate character study that it sets out to be. This movie’s failure won’t be overly conspicuous, but it still makes me worry that the guy who made Truly, Madly, Deeply is gone for good. I hope I’m wrong.