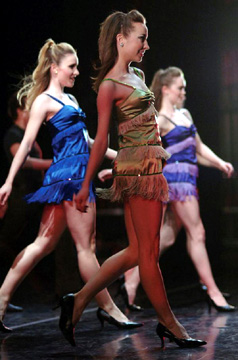 Featured will be the world premiere of Tim O’Keefe’s salute to Scott Joplin called — what else? — Ragtime Dance. The program is dubbed Romance to Ragtime in honor of Valentine’s Day. O’Keefe, assistant to company artistic director Ben Stevenson, had great success last season choreographing a medley of Tina Turner songs in a piece he named Love Thing. This year his attention turned to the ragtime king. “I was looking for something uniquely American, and the music grabbed me,” he said. Randal Bass of Austin arranged the original piano music for a seven-piece woodwind and brass combo, which will play onstage during performances. The ballet uses 16 dancers in different combinations.

Stevenson is represented by a revival of his Four Last Songs, a bittersweet look at the familiar Richard Strauss music, sung again by Melinda Gibbons and accompanied by the Fort Worth Symphony under Jack Buckhannan’s direction. The piece is set on eight dancers in various combinations. Leading ballerina Enrica Guana Tseng will perform the popular Dying Swan, set by Michael Fokine for the legendary Anna Pavlova in the early 20th century. The choreographer was inspired by the Saint Saens music of the same name from the Carnival of the Animals. Tseng recently received the Outside of Italy Best Artist Award by the city of Lerici in northern Italy, a prize usually reserved for writers and musicians. She is the first dancer to be honored.

An extended duet from Benjamin Britten’s ballet Prince of the Pagodas, originally choreographed by Kenneth MacMillan for London’s Royal Ballet in 1989, will complete the program. Jayme Autrey Griffith and Andre Silva will dance all three performances. — Leonard Eureka