Home Arts Stage Mad Margot
SHARE
Facebook
Twitter
Even in the most opera-crazed cities on earth — New York, London, Milan, Vienna — the world premiere of a new full-length opera is not something that happens every week. 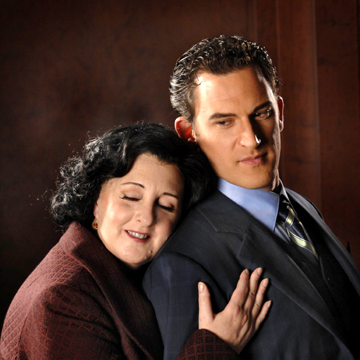 So it was fitting and proper that the Fort Worth Opera treat the very first performance of Thomas Pasatieri’s Frau Margot as an earth-shaking event in our city’s cultural history. Better still was the fact that the new work did its part to live up to the hype. It isn’t a great opera — there are a couple of places where it really doesn’t work — but nonetheless, it turns out to be a terrific show at Bass Hall. The story is set in 1938 in Amsterdam, where an American composer/conductor named Ted Steinert is seeking to complete a legendary deceased composer’s nearly finished last opera. He visits Margot Kunstler, a retired Austrian soprano and the widow of the late composer. The lonely and mentally unstable Margot approves of Ted’s work, but she turns possessive of him, and when he starts an affair with her personal assistant and best friend Kara, the result is betrayal and murder. Librettist Frank Corsaro dropped a few bad lines in setting the words for the piece, and the homicide cop with a philosophical bent was an embarrassing creation, even though the role was sung marvelously by bass Daniel Okulitch. A far worse shortcoming was the mishandling of the big plot revelation at the end of the second act, where Pasatieri’s music patently failed to rise to the level of the drama.

Still, these were easily obscured by everything else going on. Corsaro pulled double duty as director, and his contributions were considerably better in that department. The set boasted a dramatic flight of stairs leading to an off-center vanishing point, and proved to be highly flexible. He also used the décor and some nifty lighting tricks to create an atmosphere reminiscent of Hitchcock’s films. Pasatieri’s music is heavily indebted to Puccini and Richard Strauss — indeed, Frau Margot contains explicit references to their works — and while the late-Romantic métier isn’t exactly fresh (recent American operas have busied themselves finding other musical styles to work with), the style does fit the material. The work also offers up a number of memorable set pieces such as the comic quartet for singing waiters and two extremely funny tenor arias (there’s a phrase you don’t hear every day) for the brilliantly conceived character of a music publisher, sung by Allan Glassman. 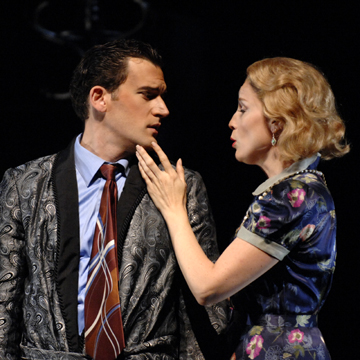 The principals are little short of world-class and visibly freed by the fact that they were originating these roles and thus don’t have to distinguish their performances from previous singers’ interpretations. Morgan Smith brings a deluxe-sized baritone and old-school masculine resolve to the role of Ted, while Patricia Risley’s mezzo is warm and attractive as Kara. The two strike a real rapport that make the characters’ romance come alive, and they also both look good in their underwear. With all this, neither of them upstage star Lauren Flanigan, whose powerful soprano and surefire theatrical instincts help carry the material through some of its dodgy patches and turn Margot into a compelling tragic figure. This character is in the tradition of maddened opera heroines, and Flanigan sings it with as much gusto as any soprano ever sang Lucia di Lammermoor or Salomé. The talent onstage helped make Fort Worth feel, for this night at least, every bit the equal of New York and London in the opera world.