Wooden Nickel takes the term “family-style” literally — the place is a private house turned into a restaurant by chef and owner Charles Haisler. 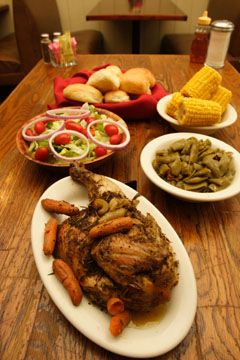 A former sun-room, living room, and large family dining room make up the three dining areas. In place of regular furniture are several tables. The carpets in the living room look as if they have not been changed since the last family lived there, all of the tables are different, and the lighting may give you the impression that Dad went on the warpath about a high electric bill. But rather than being off-putting, the place sort of feels as though you are visiting a friend’s house. Not a rich friend, by any means, but one with a comfy house. Which means it’s not a place to take a first date, but it just might be perfect for Grandma or your kid brother. And the menu at the recently opened eatery is pretty much about what you’d expect at a pal’s casa: six entrées plus one special that changes from week to week. And while no one has gone out of his way to try to make them sound delicious with lavish menu deDELETEions (“chicken-fried chicken,” “veggie plate,” etc.), it turns out that they are. In other words, your friend’s mother can cook. On a recent visit, the chicken-fried steak came to the table perfectly done in a crisp batter that had just enough pepper to enliven both the batter and the tender, juicy steak. A good-not-great homemade cream gravy was served on the side, keeping the steak from going soggy before we even got to it.

The same goes for an equally delicious catfish plate that arrived alongside a homemade tartar-sauce coleslaw. Simply breaded, the crisply fried, absolutely greaseless and fresh fish (delivered from a catfish farm daily) was deemed “the best catfish I’ve had since we moved to Texas” by the 19-year-old fried-catfish lover at the table who’s been here since 2002. I couldn’t have agreed more. A roast brisket served both au jus and with brown gravy was another winner: massive slices of melt-in-your mouth brisket with just enough fat on them to keep them juicy and just enough seasoning to keep the meat tasty. All of the meals came with an array of sides served family-style in big bowls from which we helped ourselves: freshly baked bread, a romaine-and-iceberg-lettuce mix with red onions and lots of cherry tomatoes, and two dressings made on the premises — a light and spicy ranch and a zesty oil-and-vinegar with herbs. There also were mashed potatoes and gravy, green beans, and corn. All of the sides, as we were told by the efficient and friendly staff, could be refilled as many times as we liked at no extra charge.

Of course, the entrées were gigantic, so it was hard to imagine how anyone would need extra sides. The bigger problem was admitting that there wasn’t any room left for the chocolate cream pie or peach cobbler, both sold by the slice or whole. We’ll rectify that on the next visit.