Things were looking good for the Frogs last Saturday afternoon — until the third quarter. 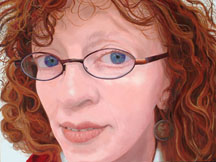 Right before the half against the dreaded University of Texas Longhorns is when the Texas Christian University squad tallied the first score. My wife and I were listening to a broadcast of the game in our car in front of Gallery 414. We were just about to open our doors and head out into the wilds of Fall Gallery Night when the Frogs returned an interception for six. Naturally, we kept the AC running and listened — carefully, to make sure we weren’t sharing an auditory hallucination — to the replay. “Holy crap,” I thought. “They just might pull it off.”

Waiting for us inside the 12-year-old nonprofit gallery were the linocuts of a TCU prof, David Conn. The football-art dichotomy was weird. What do you do when the team at the major university where you teach is on the brink of greatness at the same time that your artwork is being feted? Moreover, what do you do as a Fort Worthian when the home team is playing the game of its life at the same time that you’re trying to show local art some love? 414’s answer was to stay on message. There weren’t any TVs or radios around tuned to the game, and I didn’t notice anyone prodding his iPhone constantly for updates. Most of the folks there simply huddled into small groups, quietly chatting and nursing what I would soon discover were the remains of a Shiner 12-pack. I told co-owner and -curator Adele Krause that I was too discreet to claim my hostess’ last beer, but she pooh-poohed me and went on to say — and I’m paraphrasing here — that any complainers could go fly a kite. She didn’t seem to be in a good mood anyway. The turnout wasn’t as great as she had expected. 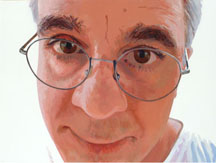 The likely culprit, she said, was our town’s newspaper of record: On an anemic map of local participating Gallery Night venues that ran in the daily’s previous Thursday’s issue, 414 was not included. Krause’s theory, based on admittedly partial research, was that the only ones mentioned were the galleries that bought ads. As nonprofiteers, she and her husband, John Hartley, 414’s co-owner and -curator and an amazing photorealist painter, “don’t have 300 bucks to waste on advertising,” she said. I suggested that maybe the TCU game had an effect on the crowd size — I don’t think she heard me. Later on at a different gallery, I brought up the TCU-UT factor to another art-scenester, and he argued that there is little or no overlap between art-lovers and football fanatics here in town. I offered myself as evidence to the contrary. “And who else?” he said. I was stumped.

But maybe 414’s meager turnout had something to do with the enormous amount of Conn’s work on the walls. Conn’s style is deliberate and delicate. He carves out the innards of deep, dense forest scenes, twig by frail twig, on panels of treated linoleum. Though working only in black and white and with no shadows or shadings, Conn still occasionally, and perhaps accidentally, manages to approximate depth and focus, the two attributes most often associated with serious painting. Some of his linocuts teemed with days, weeks, and months of sweat equity — you could just feel it, in the negative spaces that declared solitary leaves or spastic intersections of limbs and in the dramatic interplay of perfectly placed ribbons of black and white. But piled together, Conn’s pieces sort of bled into one another. I left 414 less concerned with what the artist was trying to say than with his mental stability.

Earlier in the evening, my wife and I had gone to the opening at Artspace 111. All of the usual suspects were on the walls — Daniel Blagg, Dennis Blagg, Nancy Lamb, Jo Ann Mulroy, and 414’s Hartley — and in more ways than one. Along with her other portraits, guest artist Leslie Lanzotti also showed her renderings of Hartley, Lamb, the brothers Blagg, and other 111 and art-scene regulars. For Lanzotti, content is secondary to the form — she wouldn’t be doing something as ho-hum as portraiture if she felt otherwise, right? Her distinguishing characteristic is the way in which she applies paint. From a few feet away, what may appear to be excellent likenesses of famous, semi-famous, and non-famous people become, up close, relief maps of a sort. The impasto is splotchy and pale, and it tends to melt in places. Her style may not be earth-shattering, but it is honest.

The turnout at 111 was OK, not as big as it has been in Gallery Nights past but still lively. Then again, Artspace 111 has increased its space threefold, so measuring last week’s crowd by previous years’ standards may be a bit unnecessarily defeatist. I also couldn’t bring up my football-over-art argument here. No one I know associated with 111 strikes me as a hardcore sports nut. By the time I got to Gallery 817, hours later, where Velton Hayworth’s haunting, muted photos of post-Katrina New Orleans were showing, I had forgotten about the game. I didn’t realize it had slipped my mind until a middle-aged woman marched through the crowd and, speaking to no one in particular (or maybe to someone behind me), said that the ’Horns had begun lighting up the scoreboard and that there would be no further updates. Sigh.

Obviously, I don’t want to base any sort of Gallery Night summary on the handful of galleries I visited. But when the majority of art on display is solid, as it was last Saturday, and when the weather is great, as it was last Saturday, there can’t be any other explanation for the average turnout at several places. Or maybe there is, and I’m just too pollyannish to accept it. — Anthony Mariani

In Memoriam
Jan Holmes, 88, died of complications from a stroke on Monday morning, and Fort Worth is suddenly minus another early painter who helped make the city synonymous with adventurous art in the mid-20th century. (Recall that Cynthia Brants died last year at 81, and Beth Lea Clardy died in 2004 at 85.) Holmes and her sister Olive Pemberton, who was featured in a Fort Worth Weekly cover story (“Portrait of an Artist,” Nov. 1, 2006), were Broadway chorus girls in the 1930s and 1940s before returning to their native Fort Worth, raising families, and studying painting under Fort Worth School artists Bror Utter and McKie Trotter, as well as Emile Guidroz. Holmes specialized in portraits and modern abstracts but also did realistic depictions of Mexican culture.

Holmes was dining with relatives at a Fort Worth restaurant in 1999 when she suffered the first of three strokes. “How many can you get — my gosh!” Holmes told a Weekly reporter in October. She was feeling chipper that day, but her health had deteriorated in the subsequent months. Her passing, Pemberton said, was in some ways a blessing. “She was suffering so much at the end,” she said. “It’s better, really.” Holmes was admired for her ability to capture people’s essences in pencil or paint, and yet, despite her talent, she didn’t have much of an artist’s ego or temperament. A sketchpad on the nightstand beside her bed was half-filled with the final few portraits and sketches she was working on prior to her stroke. She couldn’t draw afterward, but she kept the pad there so her young grandson would have something to doodle in when he visited, and some of the pages were covered in his childish crayon scribbling. Holmes was a sweet and talented woman and an important part of this city’s golden age of art. — Jeff Prince