A look back on 2007’s horror movies doesn’t exactly reveal an embarrassment of riches. 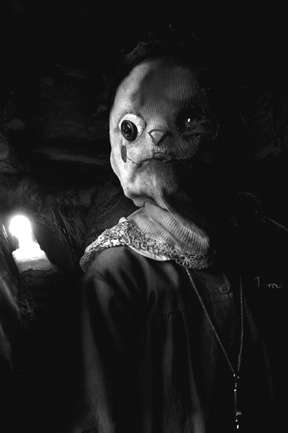 The “torture-porn” wave crashed and receded, a victim of its own excess, thank God. Hollywood’s other retreads failed to sustain any interest. (They didn’t start off 2008 well, either, judging by the incoherent remake of One Missed Call that came out last week.) Even the Asian filmmakers, who can usually be relied on to creep us out, didn’t deliver anything special. The only horror flicks that made much of an impression were Christopher Smith’s Severance and Scott Glosserman’s Behind the Mask: The Rise of Leslie Vernon, movies that tickled your funny bone rather than scaring you.

Just before the year expired, though, the genre got a bailout of sorts in the form of the Spanish film The Orphanage, the latest in that country’s proud history of elegant cinematic ghost stories. Hitting our theaters 364 days after Guillermo del Toro’s Pan’s Labyrinth did, the movie clearly pursues the same note of tragedy set in the antique past and the same audience, which stands to reason – del Toro is the executive producer. That’s a dangerous game to play, since few movies can withstand a comparison to Pan’s Labyrinth. It’s no surprise that this film falls short, though it gives some really good scares along the way.

The movie stars Belén Rueda, who has primarily worked on Spanish television, though you may have seen her in Alejandro Amenábar’s drama The Sea Inside. She’s convincingly rumpled here as Laura, a 37-year-old woman who spent much of her childhood at an orphanage on the northern coast of Spain. Some three decades after last seeing the place, she buys up the now-abandoned property and returns there with her husband (Fernando Cayo) and their young son Simón (Roger Príncep), hoping to fix up the building and use it to take in a few special-needs kids. Simón already has imaginary friends before he moves into the house, but after venturing into a cave on the beach, he comes out with six new ones. These don’t play nice, leaving real traces of themselves for Laura to find and whipping up domestic discord by letting the boy in on the family secrets. When Simón vanishes a third of the way into the movie, his mother becomes convinced that he’s been abducted by these annoyingly invisible beings.

First-time feature director Juan Antonio Bayona hasn’t yet developed a distinctive style, and you can frequently see him imitating Amenábar and del Toro, filmmakers who’ve made superb Spanish ghost stories of their own. (Sergio G. Sánchez’ DELETE also refers heavily to the story of Peter Pan.) He’d be easy to write off as a derivative hack if he didn’t display so much raw talent here. He directs with a sinuous grace that helps him create no less than five memorably unsettling scenes: 1) An old lady who claims to be a social worker (Montserrat Carulla) gives Laura and us the creeps as much as any ghost. 2) Laura’s more painful encounter during a party with a silent kid wearing a grotesquely decorated bag over his head. This takes place during the day. (I always like it when horror filmmakers figure out a way to stage their scares in broad daylight.) 3) A medium (Geraldine Chaplin) tries to contact the spirits in the house, while the other characters observe her remotely through surveillance cameras. The grainy video stock gives the sequence a feel of its own, as well as effectively contrasting the ancient ghosts with the modern technology. 4) The kids’ game of “1, 2, 3, knock on the wall,” seen in the movie’s idyllically sunlit opening shot, takes on sinister overtones in a supremely skin-crawling bit late in the film. This and the other scenes make good use of understatement, which plays well against 5) the best cinematic shock death since The Departed, which comes smack in the middle of the movie.

Rueda gives an excellent performance as a woman who gathers strength during the search for her son, which leads her to discover some gruesome truths about the place she once called home, but she can’t keep the film from going wrong at the end. I can’t go into my issues with the conclusion without giving it away. I will say that whereas American slasher flicks come down to murdered teens, Spanish ghost stories come down to murdered children, and this one proves no different. Like Pan’s Labyrinth, this film dangles a fake ending in front of us, where everything works out well and then subsides into a colder, harder reality. Bayona badly wants to summon up the devastating power of that film or Amenábar’s The Others, but he follows his models too closely to let the film stand on its own. Sharply disappointing as The Orphanage’s failure is on this front, the film does scare you and give you a glimpse of an intriguing new talent, which is more than can be said for most of the crap that fills our multiplexes under the guise of horror cinema.