Good jazz is based on emotion. At its best, it colors outside the lines. 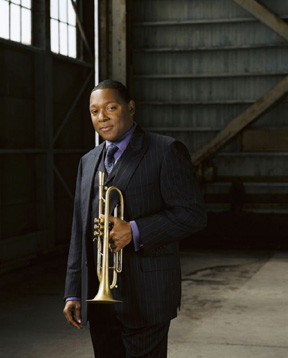 Standards become starting points for interpretations that are often, as on this Wynton Marsalis collection, comforting but seldom challenging, which isn’t necessarily a bad thing. Comforting music is important, even in something as intrinsically non-mainstream as jazz. The prolific, Pulitzer Prize-winning, New Orleans-born trumpet player and composer is credited as one of the people who “saved” traditional jazz in the 1980s and early 1990s. Along with 30 or so jazz albums, he’s recorded 16 classical albums and has nine Grammy awards, several in each genre.

The 14 smooth, often quietly playful songs on Marsalis Standards range from “Stardust” and “Embraceable You” to “April in Paris” and Duke Ellington’s “Melancholia.” They come from his Standard Time series of recordings and three other releases, and they all are mostly mellow, sometimes bordering on soporific – even the potential excitement of “The Seductress” is slow and seemingly inevitable rather than sensual. The performances, however, are always impeccable. The quietly intense, romantic “Spring Yaoundé” is the collection’s most interesting song, with its trumpet and piano slowly leading into the borderland directly between classical and jazz, with echoes of exodus in the blend.

Marsalis says he likes to play standards because they create expectations in the listeners “even if they do not know the standard.” The expectations here will vary from listener to listener, of course, but his subtle combination of jazz and classical influences can at least be – often is – intriguing. Marsalis Standards is a nice starting point for listeners new to jazz or introspective listeners who want to be comforted rather than challenged. On a late, warm night with the lights low and a glass of wine in hand, this music may be the perfect accompaniment.- Tom Geddie