The holiday tree still sits in the middle of Mamma Mia Italian Grill & Pizza, not far from the huge stone fountain with the angel pouring water from a pitcher atop its head. 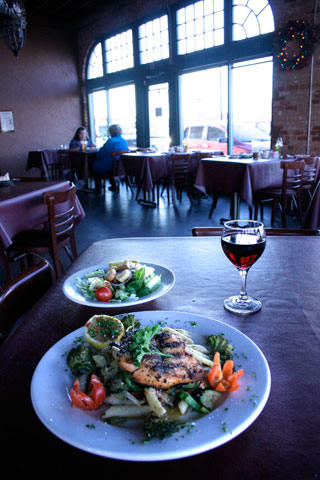 Even if the season has recently passed, the tree is an appropriate symbol for the Mamma Mia experience, whose scrumptious, cream-heavy indulgences brought back vivid memories of the yuletide gustatory splurges of past, heavier times. Indeed, some of the flavors and goodies on Mamma Mia’s diverse menu are as rich as the saturating red-brown of the restaurant’s brick walls.

The appetizer of stuffed mushrooms comes in either a light or heavy cream sauce. If you truly want simply to whet your appetite rather than smother it in a couple of bites, go with the light sauce. The heavy cream is undeniably delish, but the combination of alfredo and what tasted like melted mozzarella spread extravagantly over moist fungi caps stuffed with breading may prove too filling for many folks, especially at the outset of a meal. Shaped like one of those monster burritos you’d see at some specialty chains, Mamma Mia’s all-meat stromboli was golden brown on the outside, brushed with olive oil, speckled with tiny bread crumbs, and full of steaming hamburger and sausage crumbles as well as savory pepperoni slices and gooey mozzarella. The bread was, awesomely, as thick as the stuffing. Both went well with the side of sweetish marinara dipping sauce.

The veggie lasagna was unspectacular but solid, just your typical assemblage of layers of wide baked pasta noodles, silken ricotta cheese, and red sauce covered by a thick roof of melted mozzarella. Still-crisp broccoli florets, sweet carrot wedges, and chopped spinach were the most prominent garden dwellers here. Two of the house specialties, however, were outstanding. The capellini primavera featured a generous al dente mound of the pasta strands whose thickness lies somewhere between spaghetti and angel hair. Poured overtop was a delectable pink gravy, a mixture of alfredo and marinara, with the basil-inflected tomato-based option earning top billing here. “Primavera” is, by definition, a vegetable sauce, and Mamma Mia’s was loaded with sautéed broccoli, squash, zucchini, bell pepper strips, carrots, and onions. For folks who believe an Italian dish is unthinkable without the addition of some sort of meat or fish, Mamma Mia’s capellini primavera proves otherwise.

Not that Mamma Mia’s menu would allow a carnivore to come to such an uncivilized state, especially since the kitchen serves up a tortellini bolognese that’s to die for: a creamy, light-red sauce full of hamburger and sausage bits ladled atop a village of tortellini, those white, cheese-stuffed pasta shells that vaguely resemble small crustaceans. As with most of what was sampled at Mamma Mia’s, the bolognese presents a clear and present danger to your waistline. Proceed cautiously.