There’s no need for issuing “spoiler alerts” with a play titled A Lesson Before Dying. 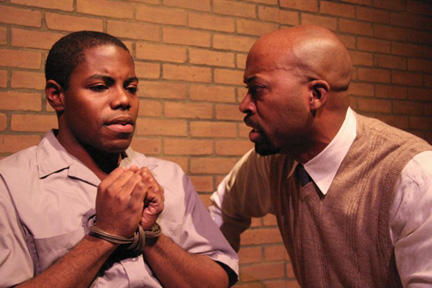 Just a few minutes into the opening scene of Jubilee Theatre’s quietly urgent, luminous production, it becomes clear that there’s no hope for death row inmate Jefferson, a young African-American wrongly convicted of killing a white shopkeeper in a rural Louisiana parish during the late 1940s. In terms of onstage action, the show amounts to little more than a deathwatch by three characters who have known the prisoner since he was a child.

Yet playwright Romulus Linney, adapting the 1993 novel by Ernest J. Gaines, manages to dig perilously deep into the marrow of these frightened, outraged, and disconsolate people, with the critical assistance of director and Jubilee artistic honcho Ed Smith. Despite the nasty, undeniable particulars of racist Southern justice in mid-20th-century America, Smith and his fine cast do not take the easy road of preaching platitudes about what many people already know: that an all-white Louisiana jury is not going to weigh the details before reflexively sending a black man to Ol’ Sparky if the accused has been found anywhere near an Anglo corpse.

Indeed, while racism hangs like a claustrophobic shroud over A Lesson Before Dying, it does not smother the play’s lofty dramatic ambition: to explore what exactly is meant by that noble but elusive idea of “dying with dignity.” Moreover, how does one march toward an egregiously unnecessary and cruel demise with heroic resolve? Everyone in this exquisitely subtle drama has different ideas, though no one is sure quite how to achieve it once the day of reckoning arrives.

The prisoner himself, Jefferson (Christopher Piper, who conveys depth charges of rage and sorrow in relatively few lines), wants to skip the whole “dignity” issue: He’s determined to be dragged to the chair kicking and squealing like “a hog,” which is exactly what his own defense attorney called him in closing trial statements. His porcine display will be his last act of protest. But the aged godmother who raised him, Emma (a heartbreaking Vickie Washington), believes her child’s duty is to be the bravest, most composed person in the execution chamber, as final testimony to the respect that’s been denied him in life. She contacts Jefferson’s extremely reluctant former schoolteacher Grant (Mandel Hill), hoping he will tutor the grade-school dropout on the inherent value of human life, especially in the shadow of persecution. But Grant himself isn’t sure how to go about that. He’s a black college graduate itching to bolt the daily indignities of the Louisiana countryside for California. He finally decides the most honorable way Jefferson can approach the electric chair is for the inmate to go over the court tranDELETEs and details of the crime scene, so his innocence will sit incontrovertibly center-stage in his mind as a kind of anchor. He also gives Jefferson a pencil and a notebook so the prisoner can record, in his best semi-literate hand, the most important memories he has amassed throughout his young, foreshortened life. This will serve as some kind of testimony, he hopes, to his time on the planet.

Those are the best ideas the schoolteacher Grant can come up with. They chafe the Rev. Ambrose (the imperious Marcus Maulding), the man who baptized Jefferson and believes his soul must be vetted and strengthened through vigorous prayer and Bible study before the execution. The two men – the pious testifier and the agnostic, bottom-line-focused intellectual – lock horns, with Jefferson in the middle, wondering if his death will have any meaning when he’s never even contemplated his life.

A Lesson Before Dying crackles with dramatic tension despite the fact that most of its conflicts are internal. As Grant, the cautious professor who offers Jefferson a prison crash-course in composition, philosophy, and ethics, Hill is eventually revealed as the pivotal performer here, and he carries the show with a humorous, doubt-ridden characterization. He stumbles around the right choices along a journey he can’t hope to fully comprehend. It’s quite a feat for a lead actor to play confused and well intentioned without making the whole show confusing and pedantic, but Hill nails it admirably. The entire Jubilee cast performs a kind of magic act here, finding the beautiful fire inside a very dark well.- Jimmy Fowler