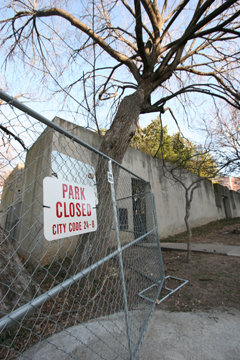 The park that at one time had waterfalls, grottos, and raised walkways with beautiful views of the Trinity River from the bluffs near the courthouses had become a refuge for the homeless and now is completely fenced off. City officials would respond only by e-mail to questions about the park’s future and the reasons for its closing. Parks director Richard Zavala said it was closed because of “concerns regarding the integrity of the infrastructure,” referring to a previous study that outlined plumbing problems and a shifting foundation on the bluff.  Is the closing permanent? That is “undetermined at this time.” The city council was advised of the closing, Zavala wrote, in a 2006 executive session relating to “tort liability in city park and recreation areas” – that is, the possibility of the city getting sued over conditions at Heritage Park and elsewhere.

But the closure of Heritage Park has raised some eyebrows locally and nationally. The park was designed by famed landscape architect Lawrence Halprin, whose works also include the FDR Memorial in Washington, Ghirardelli Square in San Francisco, and promenades in old sections of Jerusalem, along with numerous plazas and water parks around the world. The park was commissioned as part of the nation’s bicentennial celebration in 1976, giving it extra historic significance. What is making some historic preservation advocates and park fans angry is the way the city has gone about closing the park. There has been little public discussion, and the city parks board received only a brief memo noting that the park would be closed “due to safety reasons.” And the city may also be intending to redesign the park – which raises more questions about the effects on Halprin’s work. “It is troubling that there has not been any public process around the decision to fence off Heritage Park,” said Lisa Lowry, board chair of Historic Fort Worth Inc. “What are the issues? How can Historic Fort Worth and the broader public address them?”

In a 2006 study by city staff, Heritage Park’s problems were listed as mechanical and plumbing deterioration, unsafe stairways without handrails, and a shifting foundation. No studies have been finished that would determine the cost of addressing the problems. Based on the report, the key issue seems to be the park’s “transient and vagrant” population, who used the water features as toilets. Council member Sal Espino, whose district includes Heritage Park, said the area was closed because of safety issues and that the city council now is waiting for recommendations from the city staff on how to redesign it. “But we should have done a better job to let the public know why,” he said. There is another report that might shed light on the city staff’s decision to close Heritage Park, but it’s in private hands. The engineering firm of Carter & Burgess assessed the park’s condition in the summer of 2007, according to Zavala, but that report was commissioned by “private parties” he did not identify. City staffers don’t have a copy of this report, he wrote. The park was closed only a couple of months after the Carter & Burgess report was completed, but Zavala did not reply to questions about whether that report was a factor in the closing.

One source, who did not want to be identified, said the Streams and Valleys organization, one of the driving forces behind the Trinity River Vision project, commissioned the Carter & Burgess report. Adelaide Leavens, executive director of Streams and Valleys, would not comment on Heritage Park. The park may have become a refuge for the homeless due to its sheltered areas and privacy, but it is not a magnet for major crime, according to Fort Worth Police Department spokesman Lt. Daniel Henderson. Three years ago, there was a “homeless on homeless” murder. In 2006, there were a total of five police reports from the park, all for alcohol consumption. In 2007, there were nine reports for park curfew violations, four for alcohol consumption, and two for graffiti. “But nothing of consequence,” Henderson said. Whether the park qualifies for designation as a historic site is up for debate. In the 1970s, Streams and Valleys Inc., which was working on preserving parks along the Trinity River, wanted to design a park on the bluff just west of Main Street. The bluff was the spot where the area’s first cavalry fort was built, in 1849. Fort Worth philanthropist Ruth Carter Stevenson was the driving force behind the project, and Halprin was brought in to design a 112-acre park that would provide better access to the river.

The park has an upper level with concrete walls, several flowing-water features, and a deck that provides the same view that the soldiers had in 1849. Stairs and decks move visitors downward to the river itself. The water features follow the walkways, sometimes at the level of pedestrians’ feet, sometimes at eye level, sometimes flowing over walls. There are raised stone blocks in the now-empty water basins that allowed visitors to cross the water flows. The park has always been problematic as a traditional public place. Access is difficult because of busy automobile traffic at the entrance, walls close off the park from surrounding passersby, and there are few obvious benches. But Halprin was not trying to design a typical park. He wrote in 1972 that most city gathering places were noisy and crowded. He believed that there was a “second kind of life in the city” that “seeks quiet and seclusion and privacy. This private life has needs for open spaces of a different kind. … It needs enclosure and quiet, removal from crowds, and a quality of calm and relaxation.”

The fact that Heritage Park embodies those qualities may be one of the reasons that Fort Worth citizens haven’t warmly embraced it. Trees block the view of the entrance, and a courthouse parking garage built next door further overshadowed the park. Over time, the water system became an expensive maintenance issue. In fact, the city has been looking for solutions to problems at Heritage Park for decades. A master plan in 1982 cited accessibility issues, and a plan in 2001 called for both better accessibility and an upgrade in maintenance. At a meeting of national city parks planners that year, then-Mayor Kenneth Barr and Zavala spoke about the importance of Heritage Park. Zavala said at the conference that the planning for improvements had been done, but “We haven’t moved forward. … We need to bring that asset to the citizens, and we’ve got to utilize it.”

The Washington, D.C.-based Cultural Landscape Foundation has designated Fort Worth’s Heritage Park as a “contemporary landscape at risk” and cited Halprin’s historic significance as a reason to restore and save the park. “Halprin was part of the movement in the last century where we were reclaiming our riverways and waterfronts from neglect and industrial use,” said Charles Birnbaum, president of the Cultural Landscape Foundation. “He used modern ideology and abstract waterfalls in a natural setting, and Heritage Park is significant when judging this architect’s work. “But it is also important that Halprin came up with a design for Fort Worth that embraced the waterfront,” Birnbaum said. “Fort Worth is now rediscovering its waterfront, and this park was the beginning of that process.” Halprin, 91, still works out of his California studio but did return calls seeking comment for this story.

Historic preservationists want the city to nominate the park for the National Register of Historic Places, but the federal government usually does not hand out such designations until a structure is at least 50 years old. But Birnbaum said there are many exceptions, including those for places with distinctive characteristics or high artistic values. “If Fort Worth feels this park is too costly to fix or maintain, they can get federal funds if they designate it an historic place,” he said. One thing the city needs to consider, said Historic Fort Worth’s Lowry, is the development that is moving toward the river, including Tarrant County College’s downtown campus, the TRV project, and new housing nearby. “When proper restoration and maintenance of Heritage Park is combined with the students from Tarrant County College, the park will be even more relevant than it ever has been,” she said.

While plumbing maintenance costs have certainly influenced the decision to close the park, the homeless issue and criminal behavior are also part of the city’s assessment. “Because of its isolation, the park has become a haven for transients and vagrants, further compounding the issues with maintenance,” the 2006 report pointed out. “Steel grates and electrical covers disappear daily and are presumably sold to scrap metal dealers.” Andy Taft, president of Downtown Fort Worth Inc., said use of the park by the homeless is an issue the city has to consider if the park is redesigned. “There is definitely a correlation between how it is designed and its patronage,” Taft said. “It is largely walled off, and it presents a foreboding face to visitors. And the way it is designed makes it easier for people to use it for illicit activities.”

Greg Ibanez, a Fort Worth architect and member of the city’s historic commission, acknowledges there is a perception problem with Heritage Park. “There might be some homeless people there, but the solution is not to fence it off and consider tearing it down,” Ibanez said. “The city can tweak design to open it up better, but we must be careful not to start changing designs [from the 1960s and 1970s], because these may have historic significance in the future.” Heritage Park “is a very significant piece of work,” he said, “and I would hope the city would consider the weight and integrity of the architecture before making any decision that would deprive future park users.”