Let’s get right to it: Indiana Jones and the Kingdom of the Crystal Skull is quite a bit of fun. 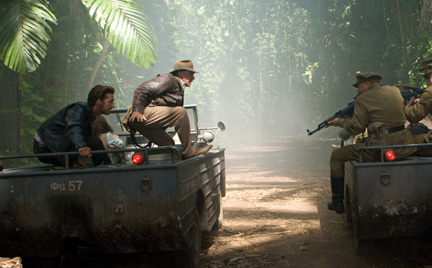 It falls short of total awesomeness, but it’s not bad. It’s a B-plus movie if I’ve ever seen one, and I’ve seen many. This is the fourth adventure film – 19 years after the third – directed by Steven Spielberg and starring Harrison Ford as the swashbuckling archeologist, and it doesn’t carry the series in any shocking new directions. It’s not that much of an upgrade over the National Treasure films (shameless knockoffs of the Indiana Jones movies), and in fact, I might well have greeted it with a yawn had this movie come out in, say, 1991.

In the last 15 years, though, Spielberg morphed from a talented purveyor of mindless popcorn movies into one of the world’s premier cinematic artists, without losing his taste for the popcorn. With all that, I’m much more inclined to indulge his wish to revisit this series. I probably won’t be alone in taking the movie this way, either.

For those of you who care about the plot: The action picks up in 1957, when Prof. Henry “Indiana” Jones is placed on administrative leave from his university after he’s forced to commit treason at a Nevada military warehouse by gun-toting Soviet soldiers under the command of KGB Colonel Irina Spalko (Cate Blanchett, who doesn’t add as much as you’d think to this stock villain role). Indy is about to head off to points unknown when he receives an appeal for help from “Mutt” Williams (Shia LaBeouf, who rolls up dressed like Marlon Brando in The Wild One), the adopted son of one of Indy’s old school chums and fellow archeologists (John Hurt). Said colleague has now lost his mind in Peru while searching for a fabled crystal skull with supposed mystical powers. That only encourages Col. Spalko to kidnap both him and Mutt’s mom, who just happens to be the same Marion Ravenwood (Karen Allen) who long ago helped Indy find that lost ark. With his new young sidekick in tow, Indy’s off to South America to rescue the hostages and beat the Commies in a race to the skull.

Much of the publicity has been about this movie acknowledging that Indiana Jones is now an older man. Indeed, Ford’s hair is all the way gray here, and the screenplay (by David Koepp, with assists from other frequent Spielberg collaborators George Lucas and Jeff Nathanson) refers on several occasions to Indy’s age, including a nod to his now-deceased father – Sean Connery fans will be sad to know that he shows up here only in a still photo. The DELETE doesn’t use this in any inventive or resonant way, just as an attitude to wear. Admittedly, it’s much better than pretending that Indy is still in his 30s.

A more serious problem is the storyline that leads into aliens, Roswell, pre-Columbian civilizations, super-powered weapons, and the mythical city of El Dorado. This plot is – how should I say this? – really stupid. M. Night Shyamalan would be hooted out of the building if he tried this stuff. Without giving away too much, the climactic sequence involves a flying saucer and a piece of a continent breaking off. None of that keeps it from feeling like a retread of the meltdown ending from Raiders of the Lost Ark. That’s why this movie doesn’t leave you with that pleasantly exhausted feeling you get from a truly great blockbuster film.

Still, what this movie lacks in exhilaration it makes up for in small pleasures. The youngster LaBeouf holds the screen easily and confidently, and if there’s a fifth Indy film with him in the lead and Ford in a supporting role (the rumors are already out there), the series will be in secure hands. As for Ford, the character of Indiana Jones brings out a raffish sense of humor in him that’s often missing in his performances elsewhere, which is always good to see.

Spielberg is in a merry mood, too, as evidenced by the witty chase sequence early on with Mutt driving Indy on a motorcycle through a college campus pursued by Soviet agents in cars. (It bears repeating: Spielberg can film a chase scene as well as any director in the world.) Playful moments like those are when this movie is at its best, and there’s no shortage of them. The opening has Indy somehow surviving a nuclear blast, and a car chase features Mutt and Spalko dueling with swords atop two speeding military vehicles. When that breaks out, there’s not much you can do except hail the director’s audacity and light touch, qualities that we too often take for granted. I prefer my Spielberg movies dark, but this bit of Spielberg Lite goes well with my popcorn.
Indiana Jones and the Kingdom of the Crystal Skull
Starring Harrison Ford and Shia LaBeouf. Directed by Steven Spielberg. Written by David Koepp. Rated PG-13.