The homey Blue Grotto has always been its own little thing in a good location: A wine-bottle toss from a legendary Italian restaurant and across the street from a legendary oyster bar; a good, strong power walk from the West 7th Street corridor; and about a mile from the hangouts on Camp Bowie Boulevard heading west. “The Grotto,” as it’s affectionately known, has always seemed to me to be a boozy way station, a place to drop into on your way to or from someplace else. Perhaps because of its stand-alone location, the Grotto has never had an identity. Except maybe a schizophrenic one.


The little bar formerly known as Saloui’s Stage Deli has always had a fun crowd, good bartenders, and a fun little party patio out front. After opening the Blue Grotto a few years ago, the co-owners, who both came from the fine-dining industry, immediately put together a decent wine list and a solid late-night gourmet menu. The wine-bar thing suited the dimly lit, grotto-like atmosphere. But it just didn’t work. So the co-owners, Cody Hickman and Rick Cashen, both avid sports fans and card-players, started poker nights and framed the place as a quaint sports bar — sort of. Then the place became a live music venue. Then … I’m really not sure.

A few weeks ago, the Grotto went through another change: owners. Long-time Fort Worth booze jockey Cody Admire, who has worked at the Grotto since it opened, took over the space.

The former owners were looking to get out of the bar biz and gave Admire a good price. Admire borrowed a lot of the money and pounced on the opportunity.

“I kind of fell into the deal,” said Admire, who plans to drop the “Blue” from the bar’s name and go with just “The Grotto.” “They were ready to get out, and they said, ‘You’re here all the time, and you do all the work anyway.’ It was such a great deal.”

He isn’t worried about the slumping economy. In fact, he said, business has doubled since he took over. “When the economy is down, liquor and bar sales don’t suffer as much as other businesses do,” he said.

And the place has never looked better.

Admire gutted the previously underutilized kitchen to make room for a pool table. The area on the other side of the bar, which previously housed the pool table, now acts as a second bar area and looks something like an Olympic training facility for bar sports or a single-guy’s ideal rumpus room. There’s a foosball table, dartboard, Big Buck Hunter, and a jukebox. While a lot of bars have all of those things, Admire’s use of the limited space is what makes it so impressive. It’s cozy, not cramped.

An accomplished local musician, Admire still plans to have bands play four or five nights a week in the front room. He said that his inspiration for the improved two-room design was the old Wreck Room/Torch building: To escape the live music at the Wreck, all you had to do was waltz about three feet next door to The Torch.

A couple of Fridays ago, both sides of the Grotto were hopping. The bands were rocking to a packed front room, and the back bar was stocked with hipster royalty and professional drunks, who collectively were hogging the freaking jukebox. The PBR was flowing like, um, wine.

Admire said he has a ways to go. He’s still in the process of redecorating, but even in its almost-finished state, it has a cool artsy loft feel. He also is trying to build the clientele. The Grotto pops at happy hour and then again after 11 p.m., he said. Filling in the void is his priority.

In many ways, Admire gets to benefit from all of the tinkering done by his predecessors. He’s seen what works and what doesn’t. But he’s definitely on the right track. The drinks are cheap, the space looks good and will keep looking better, and the man running the show is motivated. 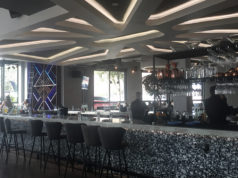