A new garage at Will Rogers comes at a price – in more ways than one.

Say adios to free parking at the Will Rogers Memorial Center.

Starting next spring, after the Fort Worth Stock Show and Rodeo runs its course, visitors to local museums, the community arts center, and events at various portions of the Will Rogers complex will have to pay at least $5 per vehicle to park in the center’s existing surface lots or a new garage, year-round.

Construction is already under way on the seven-story, $27 million Western Heritage Parking Garage on Montgomery Street. The new fees on surface and garage parking will pay for the structure, though the $5 figure could change if the city finds that’s not bringing in enough revenue to pay off the debt. While organizers of the bigger Will Rogers events are applauding the move, those who put on smaller shows say they fear the new fees will scare away visitors and vendors.

“That would pretty well ruin us,” said Charles Estell, manager of the Fort Worth Flea Market, which runs out of the Will Rogers’ Small Exhibits Building most weekends of the year. “They may be shooting themselves in the foot.”

The flea market’s business has slowed down over the past year, he said, and while the 70 or so vendors at the market may be willing to pay to park, he’s not so sure about customers. 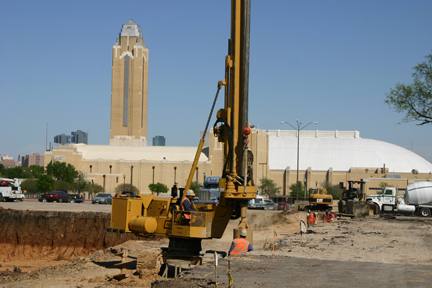 But owners of larger shows said they are glad the city is building the garage. “They definitely need more parking,” said Gary Nevins, owner of the Fort Worth Rod and Custom Car Show, which has been held at the Will Rogers center for 34 years. During last month’s show, he said, there were more patrons than parking spaces, which meant people ended up parking in neighborhoods as far as a mile away. He said the show charges $12 for admission, which is on the low end for car shows, and that $5 for parking won’t frighten away many visitors.

“Time will tell if the parking fees keep people away,” said Jason Lamers, a city spokesman, in an e-mail. “The fact is that all of the clients are important. Would we like to keep parking free? Of course. But the unfortunate reality is that the problem can’t be fixed without a significant increase in parking capacity.”

Construction on the garage began March 1 and could be finished before the end of the year, said Veronica Villegas, a city spokeswoman. The project will cost significantly less than the original estimate of $35 million.

The garage will add slightly more than 1,100 spaces to the 5,300-plus now available at Will Rogers, but that’s only the first step in changing the parking situation for the center and the surrounding Cultural District. City officials have looked at construction of a streetcar line between downtown and the Cultural District, which would reduce the need for parking, but that won’t happen for at least five years.

The garage construction is being financed via revenue bonds, to be repaid over the next 25 years through the parking fees – although a long-term contract hands all the parking revenue, including from the new garage, to the Stock Show organizers rather than the city, during that major annual event. City staffers presented studies by three consulting firms to the city council between 2001 and 2008, showing that the Will Rogers needed anywhere from 1,700 to 6,000 additional parking spaces.

The price tag for the project includes a $500,000 design fee paid to the nonprofit group Event Facilities Fort Worth Inc., which supports the Stock Show and is headed by the exposition’s president, W. R. Watt Jr., and Fort Worth investor Ed Bass. The contract with W.G. Yates and Sons Construction to build the garage is worth $16.6 million. The plans also call for about $2.7 million for new gates and “control features” on surface parking and $280,450 for landscaping on Gendy and Watonga streets. The project cost of about $24 million was bumped up another $2 million with insurance and costs for issuing the certificates of obligation.

Lamers said the garage was not made part of last May’s city bond election because city policy is for revenue-generating facilities to be paid from that source, by direct users, rather than by taxes on the general public. At the $5 rate, about 440,000 cars will have to park each year to pay off the revenue bonds on time.

That fee will still be low compared to other event parking, said Michelle Finucane, owner of the Original Fort Worth Gun Show. “It’s ridiculously cheap,” she said. By comparison, parking at the Fort Worth Convention Center now costs $7 per entry at the Commerce Street garage, while the Houston Street garage charges $2 per hour and $12 for a full day’s parking.

Nevins and Finucane were describing the parking situation on days when multiple events are going on at the center. But there are many other days when the calendar isn’t so crowded and lots such as the one on Harley Street are mostly empty.

“I’m worried; it’s definitely a concern,” said Jeanie Sharp, president of Texas Golden Gloves, a nonprofit that holds three multi-night boxing events at the John Justin Arena in the center each year, two of them back-to-back. She said parking lots at the center are often mostly empty during Golden Gloves events. Season ticket holders who attend an event for the full eight nights would have to pay $40 to park, which Sharp believes could deter people from attending as often.

Fort Worth philanthropist Ruth Carter Stevenson, president of the Amon Carter Museum board, said she feels the parking is “badly needed” at Will Rogers but that the fees may force Carter Museum employees to park elsewhere. Many of them now park at Will Rogers, just across the street from the museum, but may end up parking considerably farther away rather than paying the fees, she said.

Becky Adamietz, a spokeswoman for the Fort Worth Museum of Science and History, said she doesn’t feel the garage will affect the volume of visitors at that museum, which is next to the planned garage.

One solution for nearby businesses and attractions could be a parking validation system, which would allow fees to be waived for employees of the center and surrounding museums. It’s something that Jody Ulich, president of the Fort Worth Community Arts Center, hopes the city can do. She said that unless there is adequate planning to deal with it, the parking fees would affect the arts center’s traffic.

“There will be an impact,” she said.