New York audiences were understandably abuzz when Thornton Wilder’s The Skin of Our Teeth debuted way back in 1942. Wilder was already considered an innovative American dramatist on the strength of 1938’s Our Town alone. But Skin was a delirious dance into the avant-garde. Wilder not only invited direct audience participation in the original New York staging, but he also playfully “recast” the show during the third act and unleashed a torrent of biblical, classical, and scientific references while telling the tale of the prehistoric Antrobus family, a New Jersey clan who soldier on through an ice age, Noah’s Old Testament flood, and an apocalyptic war. 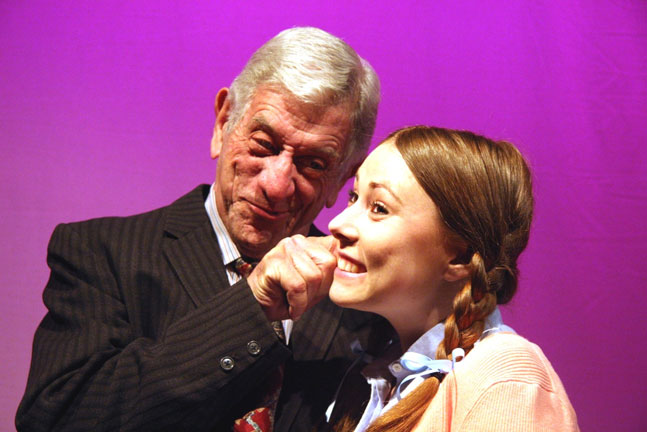 Now Stage West and director Jim Covault have decided to revive The Skin of Our Teeth in the age of terrorism and global warming. Die-hard fans of the American theater shouldn’t hesitate to buy a ticket. Wilder’s intellectual comic vaudeville is rarely revived, and Stage West has the artistic and financial resources to do a quality remounting. But precisely why so few theaters of means are willing to revisit this play is up for debate. You can argue that the non-linear plot and all the meta-commentary about theater and humanity is still challenging to contemporary audiences. Then there’s the possibility that Wilder’s script is a noble but portentous mess that never builds a convincing framework for the intertwined religious, secular, literary, and historical themes it’s trying to develop. I vote for the latter.

To summarize The Skin of Our Teeth is to invite disbelief. The play happens during three acts, each of which is contingent on a great disaster: an ice age, a flood, and a world war. During the first act, we visit the Antrobus family home in Excelsior, where moody Mr. Antrobus (a flawless Jerry Russell) has just invented the wheel and is polishing up the alphabet and the multiplication table. Mrs. Antrobus (Stephanie Dunnam) fussily guards the domestic front like an old-fashioned housewife, shepherding children Henry (Patrick Bibb) and Gladys (Cassie Bann), plus their pet dinosaur (a dour, silent Heather Sturdevant, complete with tail and claws) and pet woolly mammoth (Linus Craig, a little scary in long fake forelegs and a shaggy wig). The ambitious and untrustworthy family maid Sabina (a gorgeous and sharp-tongued Renee Kelly) is also the play’s commentator, who frequently stops the action to express her disapproval.

Act II is set at an Atlantic City boardwalk, where the Antrobus family is on vacation to celebrate the parents’ 5,000th anniversary. Sabina returns disguised as a beauty contest winner, and she’s aiming to bust up the marriage. A fortuneteller (Gregory Lush, in a wise and deliciously queeny turn) loiters nearby to give a haunting monologue whose theme is: “The future is easy to read. Reading the past? Now that’s hard.” Marital disaster is thwarted when the Antrobuses are compelled to herd the world’s animals into male-female pairs before an imminent flood.

Act III begins immediately after a seven-year-long world war. The Antrobus’ New Jersey home is a bombed-out shell, and we learn that Mr. Antrobus and son Henry (who, it was earlier disclosed, was originally named Cain) fought on opposite sides. I won’t disclose the non-ending, but suffice to say Wilder’s themes have developed clearly and rather repetitively by now: Survival and rebuilding is the perpetual cycle of humanity, and heroic love and civilization, especially in the form of literature, are what make endurance worthwhile.

Stage West’s The Skin of Our Teeth is full of great lines expertly delivered and, in the Atlantic City scene, some delightfully hallucinatory bits of background action from an ensemble cast of extras, wildly costumed by designer Leigh Ann Chermack. But the play can be enjoyed only as a series of loosely connected vignettes that are constantly and distractingly interrupted by Wilder’s obsession with breaking the fourth wall and highlighting the mechanics of theater. Some third-act business about recasting the play’s main roles with offstage crewmembers nearly dragged last Sunday’s matinee to a halt.

The overarching problem with this play? No, it’s not those Flintstonian dinosaur pets. Rather, it’s that all of the random, sometimes clumsy cross-references to biblical figures and historical epochs represented a challenge that director Covault couldn’t quite overcome. The script hints that Mr. and Mrs. Antrobus are Adam and Eve but also that Mr. Antrobus is the bipolar Old Testament god Yahweh. And then he’s given the task of sheltering semi-mythical and purely mythical beings from the dangers of the coming ice age: the poet Homer, the prophet Moses, and the original three Muses of Greek literature. That’s a lot of arbitrary allusions to shoehorn into the first act alone.

If there’s a soul beneath this Skin, it’s provided by Dunnam’s tenacious performance as Mrs. Antrobus. The easy choice would’ve been to play this valiant family protector as a bland saint, but Dunnam injected tough, impatient love into her version. She was nagging and even brusque with her children and husband, but by the third act’s scene with her traitorous son Henry, she exuded a quietly powerful, tangible forgiveness that was a tall order for any actor to convey. If only she’d been around to whack Thornton Wilder in the head while he was revising this script … – JIMMY FOWLER

The fledgling Texas Dance Theater debuted modestly last April and, despite sour economic times, is embarking on four new programs spread out over the next several months, together entitled A Season of Choreographers.

For his dance sequence entitled A Prayer for Women, Wood has chosen “Let This Acceptance Take,” music by Scottish composer Patrick Doyle, whose resumé includes the scores of various Hollywood movies, including some of the Harry Potter series. Wood said, “I came to TDT looking to do something I couldn’t do with my company. This group works en pointe. But I discovered I needed to adapt to what they can do. It’s a different experience for me.”

McKnight’s contribution is his new ballet, Eight Lines, set to a DJ Howie B remix of the Steve Reich music and featuring six dancers in a series of short pieces. Hunter will premiere her Marimba X 4, using music by Astor Piazzolla and Ney Rosauro, and Askew will present a new ballet set to Rachmaninov’s “Vespers.” — Leonard Eureka

The Skin of Our Teeth