It’s easy to take good service for granted. I’m really impressed by servers who anticipate my needs, instinctively show up when I want something, and are generally unobtrusive. What I don’t like are the over-the-top bartenders and servers. You know, the “welcome to [insert name of chain restaurant or bar] can I get you started with some mozzarella sticks and annoy the living shit out of you, bro?” 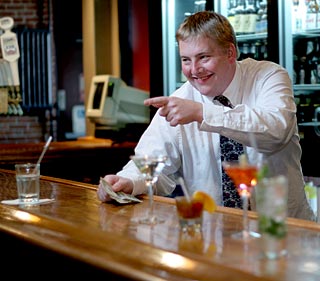 Good servers — bartenders, waiters, or whatever — are like baseball umpires: If you don’t notice them, they’re usually doing a pretty good job. But a lot of variables play into the quality of service you get at local watering holes. And the waitress or bartender isn’t always to blame.

For example, I was downtown a couple months ago at a friend’s wedding reception/luncheon at Reata. When the deal was over, a bunch of us decided to hit the town. By the time we’d finished a few pints at the Flying Saucer, we realized we were hungry. Someone in the group suggested the Fox & Hound, since it’s one of the few places downtown that could handle our walk-in mob of 27 people.

It was a little after 5 p.m., and the place was virtually empty. Not surprisingly, it took a while for our waitress to get our drink orders, and we had to wait even longer to get food menus. Poor thing, it was her first day. But where was her help? Wasn’t there a manager on duty or somebody else of authority to notice her floundering and send some helping hands?

For the record, our server was sweet, polite, and seemed genuinely interested in giving us good service. But there’s no telling how much money that place lost on the drinks we would have ordered. It was definitely a situation in which the manager should have stepped in and rescued his new employee or, even better, never have put her in such a predicament in the first place.

After that, all 27 of us staggered over to Paddy Reds. The place was pretty empty when we arrived, though other folks started piling in rather quickly. Our group was a pretty eclectic mix, ranging from parents who normally have just two or three drinks to celebrate a day away from doing whatever parents do to professional drinkers, those of us who see imbibing as a second job and take it very seriously. But that night, all of us were determined to take the trip to Drunktown. There was a weird kind of alcohol-fused synergy at work. Our crowd announced itself loudly upon entering the bar, with a lot of disquieting woo-hoo-ing from the amateurs. (Sigh.) The bartenders didn’t flinch — though the same cannot be said for the 10 or so regulars sitting at the bar who scattered like roaches when our sauced tsunami arrived.

The service was flawless, even when the place filled up. The bartenders poured and delivered shots by the dozen and kept the drinks coming with machine-like proficiency. The party eventually — and somewhat awkwardly — split into bride cliques and groom cliques, with the bride-side at the pool table and the groom-group at the shuffleboard table. But nothing, we all quickly discovered, can bring friends together like recurring rounds of SoCo-and-lime shots.

After midnight, most of the amateurs went home, and the dozen or so of us still standing headed to Rick O’Shea’s. The service at Rick’s is always fast, friendly, and professional. The regulars are great, too. The place is ideal especially if you want to be around drinkers who don’t wear their ballcaps backward or go around with popped collars. At that point, we stalwart few were continuing to drink only as a matter of pride. A couple of rounds later, we all slogged back to the downtown hotel rooms we had cleverly reserved as a hedge against having to drive home.

Our slog would have been a little closer had we never left Fox & Hound. – Eric Griffey