The influence of Django Reinhardt continues to pop up in the most unusual places, like the 2007 video game BioShock, which contained several Reinhardt songs on its soundtrack. 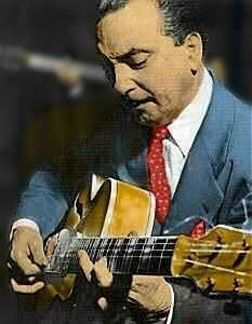 The Gypsy guitarist was one of the first great European jazz musicians, forming Le Quintette du Hot Club de France in 1934 with the priceless violinist Stéphane Grappelli, and though their work was interrupted by World War II (during which Reinhardt used a different violinist to replace Grappelli, who spent the war in Britain), their music won the awe and reverence from generations of musicians. Reinhardt had fans in other arts as well, with adoring references to him cropping up in Woody Allen’s Sweet and Lowdown and Sylvain Chomet’s The Triplets of Belleville. (There’s also Takashi Miike’s film Sukiyaki Western Django, in which Reinhardt’s name seems to be a talisman for the film’s mad mash-up of Japanese and Western tropes.)

Arts Fifth Avenue has kept the fires burning with its annual Django Reinhardt Festival, and this year’s version is a special one, since it opens exactly 100 years after the guitarist’s birth in Belgium. A5A will celebrate with food, live music, guitar workshops, and screenings of films, including 54 short French films made between 1896 and 1944 that Reinhardt might well have seen. What better time than now to sample the unique genius of this artist?