You gotta love the guv. Especially if you’re a newsperson. Just when thing get dull, up pops Rick Perry, with those cowboy boots headed mouthward. It provides new meat to newsfolks facing a long, hot, slow summer. 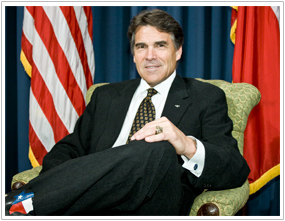 Sure, Perry has big hair, while the glare off Democratic gubernatorial nominee Bill White’s shiny dome can be spotted by astronauts.

Sure, Perry looks like an extra in Red River, while White, with his big ears, looks like Mad magazine mascot Alfred E. Neuman.

Sure, the guv hints at secession, which White hopes will help his own succession.

Now you’ve got the guv saying he’s been running and gunning, or “grunning,” as State Sen. Kirk Watson, an Austin Democrat, has dubbed the practice of jogging while packing heat.

Perry told Associated Press capitol reporter Jim Vertuno that when he jogs in the hilly woods southwest of Austin, near the house rented for him by taxpayers while the governor’s mansion is being rebuilt, he carries a .380 Ruger in a belt because he’s scared of snakes and has seen coyotes there.

On the now-infamous occasion, Perry said, he sent a coyote over the rainbow with a laser-guided slug, while loping through the forest with his daughter’s young Labrador retriever.

He spotted the coyote eyeing the dog.

“I holler, and the coyote stopped. I holler again. By this time I had taken my weapon out and charged it. It is now staring dead at me. Either me or the dog are in imminent danger. I did the appropriate thing and sent it to where coyotes go.”

White, Houston’s former mayor and an ardent bicyclist, was asked by a Dallas Morning News reporter what he’d do if he was on a ride and saw a coyote.

“I go over to Memorial Park, and I have seen coyotes,” White said. “As soon as they see me, they run away.

“I don’t tend to be afraid of coyotes,” he added.

Some might find it “hard to believe that someone would be carrying a handgun on a morning run. … But you just never know when you’ll need to defend yourself from snakes. (Let’s face it, you need some heavy artillery if you’re really scared of a snake.)

“So anyway, I’m running with my gun (‘Grunning’ is the technical term), and stopped in at the Town Lake Animal Shelter to adopt some kittens.”

Six, he thinks. He just happens to have six kitty leashes. They head out for a jog.

“Everything was going great,” Watson writes. “The kittens all run a five-minute-mile pace, just like I do in the early mornings before anyone else is up. I was humming a masculine Bach sonata and feeling real good about balancing the state budget without federal stimulus money.”

Then out stepped a dozen giant, malevolent rats.

“So I whipped out the pistol, and said, ‘Rats, this is a .44 Magnum, the most powerful handgun in the world. It will blow your heads clean off. So you’d better let the kittens and me keep running, or I’m gonna do the appropriate thing and send you where giant rats go.’

“I quickly fired off five shots, taking out 10 giant rats. Another one lunged at me, and I shot him in the gut.”

Then the giant rat leader attacked. “I did the only thing a man could do. … I shot that giant rat dead.

A Houston Chronicle story questioned whether Perry, who showed off his boots on the cover of Newsweek and used a six-shooter to start a NASCAR race, might be running a risk.

Capitol reporter R.G. Ratcliffe wondered whether Perry will be seen as “the iconic rugged Westerner” or evolve into “a cowboy parody of himself, much as Republican Clayton Williams did in losing the 1990 governor’s race to underdog Democrat Ann Richards.”

Veteran political writer Dave McNeely can be reached at davemcneely111@gmail.com.