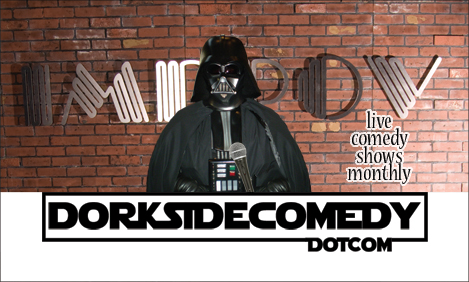 Viewers of The Big Bang Theory will want to get over to the Improv at tonight for a lineup of self-described nerds performing standup comedy in a show called Comedy From the Dork Side. We’ll give this show bonus points for any jokes about calculus derivatives and points off for any jokes about Star Wars or Star Trek. The show is at 8pm at . Tickets are $15. Call 817-635-5555.

Having received its world premiere in only 14 months ago, Something Intangible receives its regional premiere here this weekend, courtesy of Circle Theatre. Bruce Graham’s play about two brothers running a animation studio in the 1940s is a character study about siblings in close quarters who share a complicated relationship. We wonder if this play would make a good double bill with Sam Shepard’s True West. The show runs Jun 24-Jul 24 at , FW. Tickets are $20-30. Call 817-877-3040.

It’s not a yard sale, it’s a YArt Sale at this morning. Stop by before work to see the donated items (including paintings, sculpture, ceramics, and coffee-table books) on sale. If you didn’t find what you were looking for at last week’s Thrift Art Show and Auction, you might discover it here. The sale starts at 9am at , FW. Admission is free. Call 817-738-1938.

Relatively little has been written about the history of abstract art in . The Amon Carter seeks to rectify that with its show Constructive Spirit: Abstract Art in South and North America, 1920s-50s, opening this week. The exhibit features works from , , , and by more than 60 artists in various media, with some works from the for contrast. The show runs Jun 26-Sep 5 at , FW. Admission is free. Call 817-738-1933.

Alan Ayckbourn’s farces may all have the same structure, but his Role Play touches on a subject that’s different for him. It’s about a young couple whose parents are horrified at the sleazy-but-gentrifying multicultural neighborhood that the couple has moved to. Stage West takes up this play that combines the now-ness of Zadie Smith with the tick-tock structure that has made Ayckbourn’s plays successful for decades. The show runs Jun 24-Jul 25 at , FW. Tickets are $15-30. Call 817-784-9378.

It’s June, and the paint horses are back at . As with other years, the American Paint Horse Association Summer World Championship Show runs for a week and a half and features events every day instead of just on the weekend. The show runs Jun 23-Jul 3 at 3401 W Lancaster Av, FW. Admission is free. Call 817-834-2742.