I was a little amused a month or so ago when In-N-Out Burger announced that they would be opening a location in Fort Worth. I started reading and hearing little bits about an impending burger war, and this kind of cracked me up. The idea of people getting up in arms about which place will be the Fort Worth Burger King made me laugh, and it also reminded me that a lot of Fort Worth’s socializing apparently revolves around eating. Nevertheless, I want to be informed, so I’ve been trying various burgers around town so I won’t be left out in all the Facebook pontificating. For the record, In-N-Out is good (I’ve had it elsewhere), but it does not compare to Fred’s. 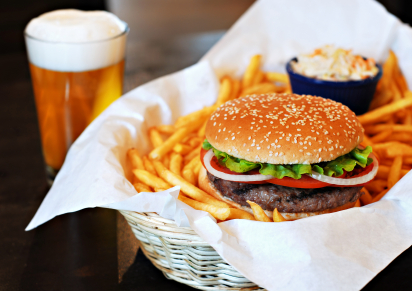 Anyway, I started my burger research at Jake’s on Camp Bowie Boulevard (not the one downtown), and true to my predilection for half-assed reporting, I ordered a chicken sandwich. I did not order, however, a shot of Jägermeister. You might ask why Jäger would even be an issue when I’m eating lunch; ordinarily, that stuff the furthest thing from my mind when I’m contemplating cheeseburgers, but at Jake’s, it’s one of the first things you think of, regardless of time of day.

When you walk into Jake’s, you immediately notice the bar. It’s long and the women behind it are cute, but it’s dominated at the middle by a triple tap covered with frost. Out of those three taps pour my least favorite flavors of booze, a loathsome triumvirate of Jäger, Tuaca, and Patrón. In my baseless opinion, I think of those liqueurs (and tequila) as dude-bro fuel, not to mention that I think they’re pretty gross tasting. I don’t drink those things even when I’m drinking, least of all when I’m eating lunch. But people are weird, and they like to do weird things, and maybe pairing a Jake’s Special Burger with a shot of Jäger is some awesome culinary experience that I’ll never have the guts to appreciate.

I guess I’m weird like that. I don’t mind a beer with a meal, and on the rare occasion that I eat someplace nice, I might have a cocktail before dinner. I know people get hammered at Chili’s all the time, so it’s obviously not that surprising that a burger joint like Jake’s would also live a double life as a sports bar.

Sort of. For one thing, the focus is still on the food. For another, Jake’s doesn’t keep sports bar hours. Sunday through Wednesday, the place closes at 10 p.m. Thursday it’s open until 11, and on Friday and Saturday, it locks up at midnight. But I’ll be damned if it doesn’t have a badass happy hour. From 4 to 7 p.m. Monday through Friday, domestic bottles, cosmos, and appletinis are only $2, and you-call-it appetizers are only three bucks. Since I like snacks, that’s a pretty awesome bargain. Moreover, Jake’s is also pretty close to a couple other good happy-hour spots –– it’s within walking distance of both Oscar’s Pub and Baker Street. If you wanted to do Camp Bowie happy-hour hopping, you could also head down the street to All-Star Sports Bar.

Whether Jake’s offers the best burgers in town is up for debate, and I know there are cheaper happy hours to be had (I’m looking at you, Spencer’s Corner), but while I wait for the In-N-Out to open up, I’ll happily take a 10-spot to Jake’s and get my fill of bargain snacks and beers. The Jäger shots are all you, bro. –– Steve Steward