I had a strange, unsettling thought about retirement the other day. I’ve had half an eye cast over the recent French strikes regarding an increase in the retirement age and half an ear tuned to what French citizens are saying. They believe retirement is a good thing and that anyone who works has a right to retire. The sticking point, of course, is at what age.

Like everyone else, I grew up believing that folks who work hard all their lives deserve a retirement at some point. It’s just a fundamental precept of modern human existence. But it’s also a disturbing example of species elitism. 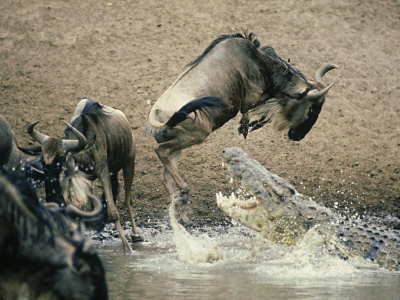 At one time or another, most of us have seen footage of a wildebeest being stalked and attacked by a lion on Animal Planet or Discovery Channel or, heck, maybe even back in the day on Mutual of Omaha’s Wild Kingdom. The kill, like the details, is almost cliché. For dinner, lions invariably single out an old wildebeest or a young one and bring it down. Why the old or young? Because they’re the most vulnerable prey.

Through no fault of their own, the young and old are easy pickings. The young wildebeest hasn’t had enough time to develop or learn the ropes. The old wildebeest knows the ropes but has lost a step. C’est la vie.

In the natural world, death is neither untimely nor unfair. Dying is just as important as living. And time plays an indispensable role in determining who or what is better suited to kill or be killed. Aging fosters balance — unless you’re human.

In the entire history of life on this planet, no species except homo sapiens has ever been afforded a “retirement” phase in their existence, much less a comfortable retirement phase. Survival of the fittest determines the limits of existence for every other living organism except us. It promotes organic symmetry — especially in terms of population and resources.

Homo sapiens no longer believe that notions of balance, symmetry, or fitness apply to them, and that’s our greatest flaw. Deluded by an almost universal sense of self-importance and egotism, we think we’re the only species that matters. We think it’s our lot in nature to have dominion over all other life forms and nature itself in spite of the  fact that the current state of our habitat clearly suggests we were the wrong species for the job.

I’m pretty confident that the older wildebeest that became dinner for lions worked hard to survive every day of its life. Where was its comfortable retirement after so many seasons of hard work? Did it deserve a retirement any less than a human being?

There is no nice way to put this but, in the increasingly complicated scheme of things, retirement is a calamitous human indulgence. Objectively speaking, we have no more right to it than any other organism we share this tiny blue orb with. It’s a species-centric luxury that we’ve foisted upon the rest of the planet, and it does more harm than good.

Am I advocating genocidal “retirement” camps, limited Logan’s Run life-spans, or Soylent Green-esque euthanasia? Absolutely not. I love and cherish my retired parents. But we may need to start reconsidering our sense of entitlement and its long-range consequences. And we definitely need to take a hard look at how we spend
our lives.

A wildebeest doesn’t have to concern itself with the banality of making a living. It simply lives, and its every breath is vital and meaningful. Somewhere along the way we traded vital, meaningful, lives for tedious, superficial longevity. Capitalism, materialism, and corporatism require us to labor at nonvital vocations but reward us with the insulatation of material wealth and comfort. Retirement has become so important because we squander the most productive years of our adulthood, virtually bankrupt of real freedom and existential satisfaction. Retirement offers the false hope that we’ll finally be free from — or at least outside of — the crummy system’s jurisdiction, that like the wildebeest, we’ll finally be able to experience life on our own terms. But we arrive at this senescent, pseudo-Shangri La tired and decrepit.

The tragedy of contemporary human existence is not death. It’s the lack of essential vocation. And after spending 40 years toiling inessentially, we’re hardly prepared to live productively or meaningfully as our days decline. We become obsolete. We become wards of the unnatural system that engaged us nonvitally for decades and now watches us wither away from any number of maladies brought on by stress or sedentary lifestyle. We become dead weight in our communities, primed for fear-mongering politicians to manipulate and pharmaceutical companies to exploit. It’s more sad, tragic, and cruel than anything that ever befalls a wildebeest in the wild.