TCU’s KinoMonda film series is usually a place for foreign fare, but this week they’re taking a break from that to present something local. Tom Huckabee’s road-trip comedy Carried Away is about a young man from Fort Worth (Gabriel Horn) who steals his elderly grandmother out of a nursing home here and sets out for the West Coast. 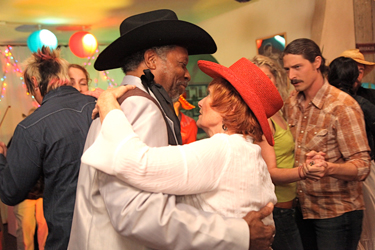 The official theatrical premiere is on the 26th at Dallas’ Texas Theatre, but Fort Worth will be getting an early look. The making of the film has been extensively chronicled in the Weekly’s pages; now’s your chance to see the finished product. The filmmaker will be in attendance to take questions.

Over the weekend, Fort Worth Central Public Library will have its own film about getting away for a bit. The Muppets Christmas Carol features Michael Caine playing Scrooge straight up while Jim Henson’s creations clown around with Charles Dickens’ other characters. It’s a nice preview for the Muppets’ star-studded movie coming out next year, and it’s also part of the library’s Dickens of a Holiday celebration that also features live reindeer, crafts, face painting, stories, refreshments, and Wii gaming. That last bit might very well give some kids gift ideas.