Discussing religion in an entertaining way is a difficult enterprise, and doing so memorably is next to impossible. Local writers Chad Feehan and Ryan Dixon have come up with a cool concept in their new graphic novel, Hell House: The Awakening, with art by Tsubasa Yozora. But the execution misses the mark. 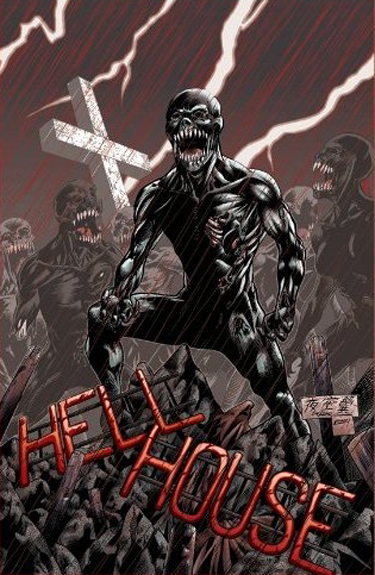 Teenager Michael “Hitch” Hitchens has enough trouble being an atheist at a private Christian school. After getting into an argument with a minister, Hitch is given the choice of expulsion or volunteering at the pastor’s hell house (“haunted” houses held at churches aiming to show the hell that awaits sinners). He chooses the hell house, where his Christian younger brother Luke and ex-girlfriend Darby are volunteering. But during the night, the apocalypse begins. The souls of the chosen ascend into heaven, zombies rise from the earth, and the living-but-not-chosen face big problems. Now trapped in the hell house with flesh-craving monsters on the loose, Hitch and an assortment of left-behinders must find a way out.

The idea of the Rapture happening exactly as folks on the far religious right see it during a trip to a hell house is an intriguing premise for an end-of-the-world tale (with some subtext of religious debate). Unfortunately, a good idea is about as far as the book gets. The writing trips early, when we first meet Hitch as he, without a hint of irony, passes out anti-religious fliers in front of his school in the manner of a street preacher at a downtown nightclub. The characters lack depth and don’t share any emotional connections. Hitch is mainly there to espouse the authors’ opinions, and the rest of the characters are recognizable only as stereotypes, such as the homophobic jock and the tough black cop. But while the pro-religion side is supported mainly by strawmen, the anti-religion message, to the authors’ credit, isn’t sledgehammered into the reader like it is in a Jack Chick comic. Feehan and Dixon said in a recent interview on Comicmonsters.com that their main goal was to entertain. Too bad. There’s little incentive to care whether any of the one-dimensional characters survive, and there are few surprises. The pastor who’s left behind, for example, turns out (gasp!) to be a hypocrite. Though the second half of the book is fast-paced and enlivened by some creatively violent mayhem, it’s not enough to keep the story moving.

But a lot of the blame for the book’s failings lies with artist Yozora, who fails to convincingly distinguish the characters and convey the scale and horror of the apocalypse. The panel layout flows well, and some of the gore is sinewy enough, but that’s it. More than once I was lost as to which character was which and clueless as to what was happening –– most of the panels are cramped close-ups of indistinguishable faces. The actual setting of the hell house is barely utilized –– there’s no sense of place –– and most of the backgrounds are murky black backdrops, if a background is shown at all. You get the feeling that the story could be taking place in underground tunnels or an abandoned warehouse. The monsters fare no better. Instead of wicked-looking demons or Lovecraftian horrors, we get zombies passing themselves off as nephilim (the half-spawn of giants and humans mentioned in the book of Genesis). The action is tepid as well, with stodgy characters and, again, art so in-your-face that it’s hard to tell what’s happening.

It’s always good to see an under-represented point of view in art, but Hell House: The Awakening isn’t thrilling or entertaining and is unlikely to do anything but preach to the choir, so to speak. This book is supposed to be the first volume in a series, but it doesn’t leave readers caring much about what happens next. Folks itching for apocalyptic reads might want to opt for Robert Kirkman’s The Walking Dead, which has recently been adapted into a hit show on AMC, or Rick Remeder’s Strange Girl, which tells the tale of living in a post-Rapture world far more creatively than is done here.