On the afternoon of New Year’s Eve, I found an Arlington sports bar that offers the alcoholic equivalent of the lost treasure of El Dorado: happy hour … all day … every day. We went to BoomerJack’s Grill and Bar for a little pre-NYE revelry and found that, in addition to the almost magical daily specials, the brand new bar in Lincoln Square looks a lot nicer than your average sports bar. Sure, the main room is dominated by a gazillion large-screen televisions, and one entire wall is composed, literally, of dozens of screens –– I actually tried to count all of the HDTVs in the several massive eating and drinking spaces and lost track after about 100. 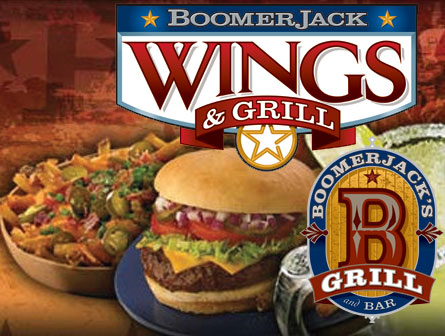 The happy hour specials include $3 well drinks (and, yes, a pre-NYE-evening rum and Coke sat well, thank you), $2 domestic pints, and $3 domestic tall beers. The size differential is noticeable — a “tall” practically scrapes the ceiling — so you might as well get the bigger size for only a buck more. Your flavors are Budweiser, Bud Light, Coors Original, Miller High Life, Miller Lite, Shiner, Ziegenbock, or Michelob Ultra.

But the day you really want to go to the North Arlington branch of the mini-chain (there are also locations in Bedford and Fort Worth) is Monday, when you can get your favorite you-call-it for $2. The disclaimer “Crown and down,” as explained to me, means that $2 will get you anything that costs as much Crown Royal and cheaper. And for $2, I think I could even break my no-brown-booze rule. Brown booze normally looks the same going down as coming back up (long story, won’t bore you with it here). Actually, on Thursdays the Arlington location basically gives away its brown hooch: Captain Morgan rum is $2, Crown is $3, and Jägermeister (should you be into that sort of thing) is $4.

But my favorite day at BoomerJack’s in Arlington might be Wednesdays, when Tito’s vodka goes for a mere $3 a pop –– I love me some small-batch vodka from Austin. And although I’m not a routine beer drinker, journalistic integrity compels me to inform you that the other Wednesday special is Sam Adams beer for $2.50.

In addition to the plentiful booths and tables, BoomerJack’s has two bars on opposite sides of the restaurant, which is probably useful if you prefer to sit and drink rather than sit and eat. The place also has two screened-in patio areas with comfy couches. BoomerJack’s food is definitely a cut above average, as we discovered when we started getting a little peckish after several drinks. BoomerJack’s has salads and even some gluten-free menu items, including nachos and burger buns.

Be advised, the daily specials at the other BoomerJack’s locations may be different. The Arlington site has one distinct advantage, aside from the all-day happy hour, though. If you want to stop in before a game at either of Arlington’s two stadiums, you can park for free in Lincoln Square and take a shuttle or walk, provided that you purchase $40 worth of culinary and/or liquid entertainment first. And $40 would get you quite a bit of happy hour at BoomerJack’s in Arlington. –– Laurie Barker James