Well, here we are in the greatest country in the world. The snow melted just in time for the massed mobs to watch the gladiators have a go at each other. Tickets, as of Sunday morning, were going for between $3,500 and $20,000. If you didn’t mind watching it on a big screen outside the Coliseum … er, stadium … last I heard, the price was $200. On Super Bowl Sunday, a 30-second TV ad cost somewhere in the neighborhood of $3 million. 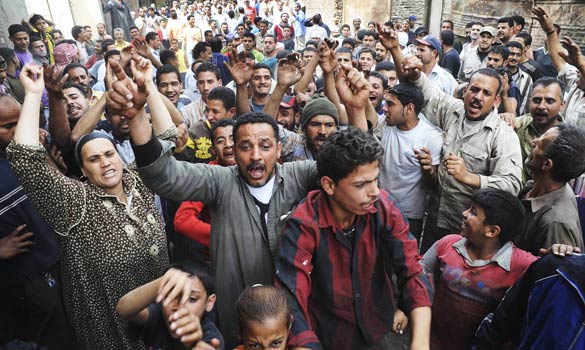 Meanwhile, halfway around the world — in Cairo, in Alexandria — a slightly different crowd of folks were (and possibly still are) gathered together. Not just in Egypt but other places as well — Jordan, Tunisia, Syria, Yemen, the Sudan. Throngs of people, rich, poor, old, young, Christian, Muslim, lifting their voices for democracy, crying out to be treated with simple human dignity. The notion of shelling out $3,000 to see a football game or even $200 to watch it on a screen probably would not occur to most of them: because most don’t have and never will have that kind of money to waste, because the whole idea of such spending is sheer absurdity, and because their own reason for coming together was a life-or-death matter, not a thing of games or local pride or commercial marketing.

The football fanatics had to endure snow and icy weather, delayed flights, and pat-downs at the airport. A slab of ice slid off the domed roof of the stadium on Friday injuring six workers, none seriously. But still they came.

And what have the Egyptians in Tahrir Square endured? Over 11 days, they fought off Prime Minister Hosni Mubarak’s thugs. They’ve had rocks thrown at them, and snipers have gunned them down in the streets. They’ve stood up to the lies told about them, by those calling them “Islamic extremists,” by those who say they’re being influenced by “outside agitators,” by those like U.S. Sen. John McCain, who has branded what’s happening in Egypt as a “virus that must be contained.”

The police have attacked them. The army has threatened them and made every attempt to shut down the flow of information, including by removing journalists from the streets, taking them who knows where. The army has cut off the protesters’ food and water supplies. And still they come.

I wonder how many, along with their children, could have been fed on all that Super-Bowl money — ad money, football money, wagered money, money for airline tickets, gasoline, hotels, parties, fine dining, booze, and call girls.  How many right here in Fort Worth could have been fed on that money? In Tarrant County alone, 20 percent of children under the age of 18 live in extreme poverty. In Texas, a quarter of them suffer from food insecurity or outright hunger, the second-highest rate of hunger in the nation.

On Saturday, former Vice President Richard Cheney came out in support of Mubarak, calling him “our friend and ally,” saying he deserves good treatment from us. Not surprising. Meanwhile, current U.S. President Barack Obama and Secretary of State Hillary Clinton have told the Egyptian people they support them in their cause. They believe in democracy and human rights — of course. They say they want a peaceful, orderly transition from Mubarak to the newly selected — not elected — vice president, Omar Suleiman. The former head of Egyptian intelligence, Suleiman has been the CIA’s point man in Egypt for renditions and torture. I’m reminded of something Malcolm X once said: “If you stick a knife in my back nine inches and pull it out six inches, that’s not progress.”

The president said he would journey to Texas if his beloved team, the Bears, made it to the Super Bowl. But they didn’t, so he hunkered down in the White House to watch the big game. His guests included entertainers such as Jennifer Lopez and Marc Anthony. He did not say he would journey to Cairo to stand in solidarity with a people who have endured 30 years of life under a brutal dictator.

OK, I guess he couldn’t really do that, given the physical dangers and political complications such a trip would involve. But now that the mock gladiators have gone home, the world needs him to focus on the valiant struggle that is still going on in that distant arena. It’s far from JerryWorld, far from marketing executives and TV commercials, but very near to the heart of this country’s concerns for democracy and justice.