Our action thrillers right now seem to be awash in young girls who are stone cold killers. The odd British entry Hanna is the latest of the bunch, coming after the flawed but unfairly maligned Sucker Punch and last year’s Kick-Ass. (You could also count Let the Right One In and its American remake, and we’ve got the movie version of The Hunger Games to look forward to as well.) I like to think of this trend as a reaction to that drippy Twilight series and its annoyingly passive heroine, but the reasons are probably more complicated than that. After all those other films, I came to Hanna wondering what it had to say that was new. I left the movie wondering what it was trying to say. 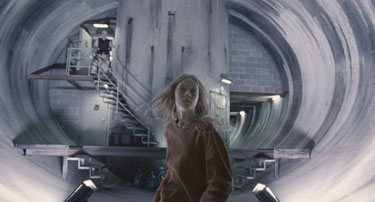 The 16-year-old girl in the title (Saoirse Ronan) is being raised by her father Erik Heller (Eric Bana) off the grid in a secluded cabin deep in a forest somewhere. Erik’s child-rearing methods include teaching his daughter to speak five languages, having her kill and field-dress a reindeer for food, and putting a gun to her head while she sleeps — he’s very pleased to see her wake up, disarm, and subdue him. He’s raising her to be an assassin, specifically to assassinate sinister CIA section chief Marissa Wiegler (Cate Blanchett with a Kentucky bourbon accent). Unfortunately, the attempt goes awry, and Hanna winds up running for her life across North Africa and Europe to reunite with her dad.

Why does everyone want someone dead? The movie doles out the backstory in dribs and drabs, and while we get some answers, the picture that emerges is still incomplete. The loose ends range from how Hanna survives being shot in the climactic scene to why Marissa seems so hellbent (beyond professional reasons) on killing both Heller père and fille. Also, it’s hard to believe that Erik doesn’t think to show Hanna a photograph of Marissa before he sends her on her mission; many of their subsequent problems could have been avoided if he had. The big revelation at the end about Hanna’s origins doesn’t carry nearly as much weight as it’s supposed to, either.

Director Joe Wright is an unlikely choice for this popcorn thriller, having previously directed Ronan to an Oscar nomination in Atonement and being known for similarly serious, highbrow, awards-bait films like Pride & Prejudice. In contrast with the garish comic-book approach of Kick-Ass and the high-camp burlesque tone of Sucker Punch, Wright films Hanna in a vérité style, as if it were one of the Bourne movies. That’s a smart way to distinguish this movie from the others. What it fails to do is generate the fairy-tale atmosphere that the film appears to be going for. Seth Lochhead and David Farr’s script makes a few gestures toward being a cracked parable about kids leaving the nest, but it’s not nearly worked out enough. Wright injects a few surreal visual touches during the climax at an abandoned amusement park, with Hanna running through a room filled with giant mushrooms and across a row of boats shaped like swans. Still, reconciling the demands of a realistic action-thriller and a children’s fable proves to be too much for the imagination of these filmmakers.

Even just in terms of pure action, Wright doesn’t really have the instincts for this sort of thing. He does pull off a sequence with Erik dispatching a bunch of assassins in the Berlin subway in a single tracking shot, but his fight sequences generally lack the bravura and fluidity that we’ve seen elsewhere recently. The director bungles the emotional content of the fights as well as the physical element. Thriller audiences are primed to expect the confrontations between Erik and a fey blond German hit man (Tom Hollander) and the final scene between Hanna and Marissa to be epic smackdowns. Wright doesn’t seem to know this and disposes of these in disappointingly perfunctory fashion.

Good thing the onscreen talent is so personable. Working in a vaguely mittel-Europe accent, Ronan holds the screen effortlessly in the action parts, but she also blends easily into the ensemble in the movie’s frankly hilarious middle section, in which Hanna hitches a ride with a wandering bohemian British family of four. Hanna’s dealings with them are her first taste of ordinary human interaction, and Ronan is funny reacting in a stoic and understated way to the touchy-feely parents (Jason Flemyng and Olivia Williams). Hanna also forms one of those intense teenage-girl friendships with Sophie (Jessica Barden), their daughter who’s Hanna’s age. Ronan and Barden make a nifty comedy team as the ultra-girly Sophie regales the poorly socialized Hanna with her opinionated musings on pop culture and the world. (A sample line, delivered in one breath: “I’d like to be a lesbian but not one of those fat ones, one of those supermodel-looking ones, but I think I’d only hold hands with my girlfriend, and I’d probably marry a man.”) This relationship seems thrown in at random, like too much else in the movie. It’s also thoroughly delightful, like too little else in the movie, and it’s the one thing worth salvaging from this intriguing failure.