Hardly a day goes by that I don’t hear someone around here complaining about politicians who are ignoring the will of the people or not measuring up as a representative of the people. Folks are all fired up and want something done, but that’s as far as their outrage gets. Especially here in Tarrant County.

A perfect case in point is Arlington Republican Joe Barton, a longtime member of Congress well-known for his closeness to the energy industry and, not coincidentally, former chairman of the U.S. House Energy and Commerce Committee. 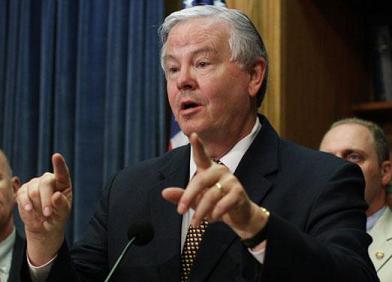 In a front-page story in the Fort Worth Star-Telegram last month, Barton bemoaned what he alleges to be a virtual government takeover of our living rooms. Challenging a section of the Energy Independence Act (signed in 2007 by George W. Bush) that stipulates that 100-watt incandescent light bulbs are to be phased out, Barton said, “Washington is making too many decisions that are better left to you and your family.”

And this after studies showed that if one incandescent bulb in every American home was replaced with an energy-efficient compact fluorescent bulb, the energy savings could light three million American homes for a year, decrease energy costs by about $600 million, and substantially reduce greenhouse gas emissions.

Barton obviously doesn’t have a reputation for being very smart. He is, after all, the shill who apologized to British Petroleum for the “shakedown” he said was being perpetrated by the White House after the company agreed to establish an escrow account to help cover claims from businesses damaged by BP’s huge oil spill in the Gulf of Mexico (the effects of which will be felt along the Gulf for generations). But even Barton is not so obtuse as to forget that large numbers of voters in his district were unhappy about the rolling blackouts they had to endure during the area’s recent bouts with cold and inclement weather. And he has to know we’re all struggling with rising power bills. So why would he come out in support of inefficient bulbs, higher energy bills, unnecessarily taxed energy grids, and added greenhouse gas emissions?

The answer is simple. Six hundred million dollars in reduced energy costs is a lot of money that electric utilities wouldn’t get. And the people who put up the most money for Barton to stay in office –– and who supported his bid to regain the energy committee top spot –– are members of that industry.

Barton is their man and, when you get right down to it, he (and they) could care less about consumer choice. Another case in point is the wildly unpopular “smart meters” that were rolled out last year. Barton was deaf to all the complaints because the “smart” meters benefitted his highest-paying constituents.

Barton and backers plainly don’t want demand reduced. So they’re comparing the light bulb policy to health insurance regulations and automobile fuel efficiency standards. Perhaps the new light bulb law will soon be referred to as “Obamalighting” (even though President Bush finalized it), and Barton will wrap himself in our living room drapes and continue to pretend he’s defending our over-regulated homesteads.

Plenty of us will simply tell him to get out of the way so we can see the TV because that’s how we roll, or, uh, recline. But what really needs to happen is a proverbial light bulb switching on in our heads.

It’s time to utilize the energy of our outrage more efficiently. We’re being bamboozled. Barton is an unabashed, bald-faced sell-out. The interests he represents are neither mine nor those of the people of Arlington and the rest of his district. And the voters there need to remember this the next time they go to the polls for Congressional elections.

Oh, and don’t worry about what would become of Barton if he got tossed out of office. He surely has a golden parachute in place for services rendered to his most important constituents. They’ll have an obscenely well-paid seat for him ready on some big energy company’s board of directors the minute he leaves office.