One hallmark of semi-employment is the way your weekends change shape. Leisure time stretches from day to day like wax in a lava lamp, occasionally separated into individual blobs by interstitial fluid backlit by work and colored with the blues of errands and bills. In other words, I’ve taken to starting the weekend on Wednesdays.

Well, most weeks, anyway. I spent last Wednesday totally hungover, so I didn’t get out until Thursday night, when I cruised the suburban wastes of H-E-B in search of the Euless Yacht Club. Of course, we all know there aren’t any lakes in Euless, and, according to some reviews I’d read on Yelp, giving a bar a name that contradicts its geographic surroundings is an unpardonable, 1½-starrable offense. In addition to a nonsensical name, the Euless Yacht Club is also guilty of the heinous crimes of being old and out of touch –– at least according to Mid-Cities nightlife expert Doug H. “This place has been around SEEMINGLY since the 1970’s [sic], and it would also seem the décor has not been updated since its inception. This is a hole in the wall bar, end of story.” 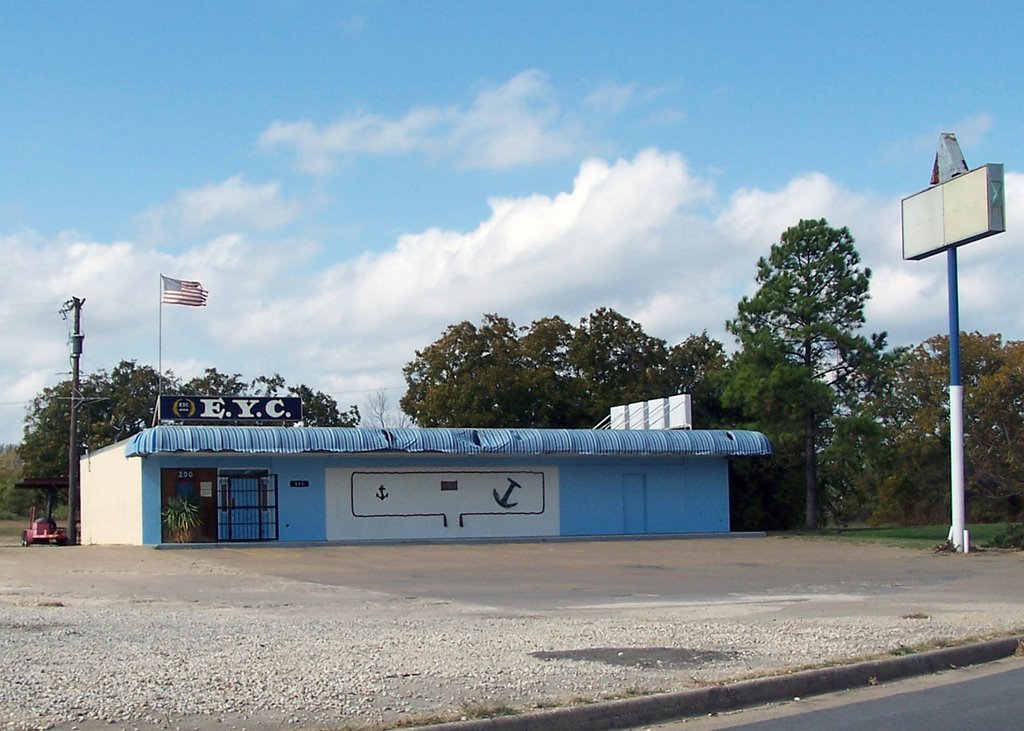 Get to the bad part! In truth, the bar dates back at least to the ’60s and the décor back to 1982. Doug H. would’ve known all this had he simply stepped down off his Affliction-clad, Axe-body-sprayed high horse and asked someone who works there, because I asked and learned that ’82 was indeed when the owner replaced whatever had been covering the walls before with a bunch of nautical junk. The room is festooned with mermaid figureheads, steering helms, model ships, and a bunch of wooden parrots. Sure, the parrots kinda stand out, but there’s a unified theme at work here, one that definitely goes with the word “yacht.” Missing that is like drinking at the Library Bar, ignoring the books on the walls, and complaining that the place isn’t quiet enough to be called a library.

I argue that the Yacht Club’s name is actually pretty great. And the place itself isn’t bad, either. Euless Yacht Club is a friendly neighborhood dive populated by middle-aged regulars who like drinking beer, smoking cigarettes, and rocking Bob Seger on the juke. The wood on the walls is totally unfinished. There’s shuffleboard in the front room, and there are pool tables in the back. The bartender remembered my drink for the second round and asked me to come back soon. The place ain’t fancy, and it’s certainly not yacht club fancy, but I think that’s the point. If affordable drinks served in a timely fashion by nice people in a not-too-serious environment aren’t enough for the Doug H.s of the world, well, then, they can sail somewhere else. –– Steve Steward

I meant to go to Dallas on Friday night, but my plans fell through, and by that I mean I drank two more beers than I should’ve in order to safely cross the county line. After marinating at The Moon for a bit, I headed to Camp Bowie Boulevard to check out Iguana’s. Last year I wrote about the place when it was called All Star Sports Bar. Iguana’s is kind of the same thing now, though the atmosphere is a lot darker — the walls are charcoal-colored (except for the large mural in the middle bar of a garish neon iguana accented by black lights), and the staffers all wear black button-ups. And while all that black lends a bar a little sophistication, what made everything really dark was the bartender who dramatically quit mid-shift, causing the owner to sweep in and command a befuddled bar-back to start making drinks. I didn’t stay to see how the rest of the night went, but I bet the kid figured it out –– hopefully, before it got busy.

After Iguana’s, I continued west, intending to check out the metal club The Rail, but going the wrong way on Alta Mere Drive, made obvious when I noticed I’d just passed Maxine’s, I thought, “Well, wherever the road takes me, I guess.” And right then, I saw it: Showgirl Cabaret.

I flipped a U-turn and parked behind the building. If you’ve ever been out this way, you know where I’m talking about: The strip club’s in a dumpy yellow building heralded by a big sign that’s perpetually dimming. Not in the least bit sketchy, right? The reasonable part of my brain pointed out that these are the types of low-rent naked-lady bars where people get stabbed in the parking lot, but the normal part told the reasonable part to shut the fuck up and make the best of it, and not only because my fingers were already punching buttons on a nearby ATM. I noticed a Cadillac 300 limo stretched halfway across Showgirl’s parking lot, and I started imagining the sort of person who rents a limo and then goes to Showgirl Cabaret. No, this wouldn’t be sketchy at all.

And, really, it wasn’t. Showgirl doesn’t have much flash — you could probably set up something similar in your garage if you had some green light bulbs and a Limp Bizkit album — but whatever. It’s a one-room affair anchored by a big square bar flanked at the corners by two small stages, both of which are graced by silver poles. One side had some leather couches. The other had two pool tables. Both had strippers, some of whom looked like they’d been at it a while. The limo crew had sort of cordoned off an ad hoc VIP area –– they were a bunch of old fat guys in cowboy hats with an endless supply of singles at the ready, and when the boys lured away the stripper who had asked me if I was sticking around, I drank a beer and hit the road, heading someplace where the women shine you on for free. –– S.S.