Sometimes a play can just suck you in with an eye-catching title, and that’s certainly the case with Larry Larson and Levi Lee’s two-man show Some Things You Need to Know Before the World Ends (A Final Evening With the Illuminati). Still, if the title alone isn’t enough to get you into the production being put on by Drag Strip Courage, know that the Chicago Reader once called this play “a very strange work” and a “mindfuck.” 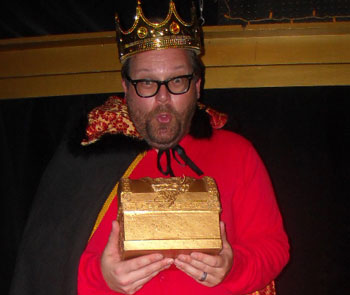 The play is about one Reverend Eddie, a lonely preacher who’s preparing his final sermon on how life is like a basketball game. He’s convinced that the voices he hears in his head belong to the Illuminati (the shadow groups who are supposedly controlling the world), but he’s not afraid of the future, “for the Lord is with me, and I am heavily armed.” Reverend Eddie is thrown for a loop, however, when his dimwitted, hunchbacked assistant Brother Lawrence suddenly starts to experience religious visions of his own. At some point, there’s also a discussion between St. Timothy and a flamboyantly gay St. Paul about the puritanical and misogynistic aspects of Christianity. This weekend represents your last chance to catch the two-week run of this controversial comedy at Arts Fifth Avenue.