Some young thespians bag their first Academy Award nomination and morph into Serious Actors who do only prestige projects intended to win them the Oscar. So hooray to Jesse Eisenberg, who has followed up his Oscar nod from last year by re-teaming with Ruben Fleischer, who directed him in Zombieland. The resulting action-comedy, 30 Minutes or Less, isn’t as ambitious, audacious, or visually innovative as that delightful 2009 horror-comedy mash-up, but it’s driven willy-nilly by the same anarchic spirit. 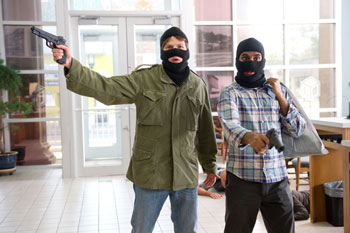 Eisenberg portrays Nick, an arrested case of a pizza delivery boy whose life is fast passing him by. When he protests to his best friend Chet (Aziz Ansari) that he wants an adult conversation, Chet responds, “Adults? You had a Lunchables for dinner!” Nick’s abruptly forced to shoulder responsibility one day when he goes out on his delivery route and is kidnapped by Dwayne and Travis (Danny McBride and Nick Swardson), two moronic criminals who strap a bomb to Nick’s chest and inform him that they’ll blow him up unless he robs a bank for $100,000 by the end of the day. Sure that he’ll be in pieces within a few hours, the terrified Nick enlists Chet to help him commit the robbery and sets about squaring away his unfinished business with his ex-girlfriend Kate (Dilshad Vadsaria), who happens to be Chet’s sister.

The opening credits sequence sets the tone for this comedy that holds you to the edge of your seat, as a weed-smoking, on-the-clock Nick speeds through suburban streets in his ancient, battered Ford Mustang without slowing down for stop signs, road traffic, or kids playing on the sidewalk. Fleischer maintains a consistent tone that is always perched on the brink of mayhem, which is added to by characters such as Dwayne’s wealthy, manlier-than-thou Marine dad (Fred Ward) and a contract killer (Michael Peña, pilfering laughs everywhere) who calls himself “The Satanic Hispanic” and turns out to be a big baby when he’s wounded. Dwayne and Travis’ criminal plots are inspired flights of full-blown idiocy — check them working out the details of how they plan to run a chain of tanning salons that are fronts for prostitution. After headlining the disappointing Your Highness last spring, McBride is back in the supporting cast where he belongs, and his lowbrow comic energy straps a jet-pack to this movie’s momentum.

Just in case you thought Zombieland owed its humor to its zombie-related special effects, Fleischer shows that he can score laughs with simple physical comedy in an early scene when Chet assaults Nick after finding out about Kate, which treats us to the inexpert grappling of two guys with no idea how to fight. First-time screenwriter Michael Diliberti gooses this caper plot with ingenious touches like the clever use of a laser pointer that schoolteacher Chet wields in class and a bit during the bank robbery when Nick tries to give some looted cash to a customer who’s been accidentally wounded, a joke that’s not only funny in itself but also advances the plot in an unexpected way. The referential gag with Eisenberg’s character making fun of Facebook is well-placed; the joke would have gone stale by this time next year, whereas here it’s good for a laugh.

Speaking of the lead actor, he commits to his role here as firmly as he did in The Social Network, and early on when Nick talks to Kate for what he thinks will be the last time, Eisenberg does the only thing he can do with the scene and plays the emotions absolutely straight. He also pairs well with Ansari, who finally finds a movie role worthy of his talents. Chet is pragmatic about the situation (he immediately runs away at the least sign that Nick’s going to explode) and alternately brilliant and unhelpful when it comes to getting Nick out of his mess (talk of defusing bombs leads him to digress about The Hurt Locker and his Netflix queue while Nick’s timer continues to tick down). Brimming with both cosmic and comic outrage over the predicament he’s found himself in, Ansari makes the sidekick into a compelling wild card in a movie full of wild cards.

This isn’t a flawless piece of work. The epilogue after the end credits roll makes no sense, and the whole enterprise lacks the final ounce of lunacy that characterized the similar stoner-caper comedy Pineapple Express. Yet 30 Minutes or Less is an unpretentious romp with just enough violence to give itself an unpredictable edge. At a scant 83 minutes, this quick-and-dirty comedy knows what it’s out for, scores its laughs, and gets off the screen.