When Guillermo del Toro pronounces an old movie as the scariest thing he’s ever seen and announces plans to remake it, you sit up and take notice. You do it even if, like me, you can’t find the original 1973 TV movie that he’s referring to. And you’re curious about the project even after del Toro hands it off to a first-time feature director. After all, we’re talking about del Toro, the filmmaker who directed Mimic, The Devil’s Backbone, and Pan’s Labyrinth. He knows scary. Sadly, the guy who has taken the director’s chair has a few things to learn, as evidenced by the resulting film, Don’t Be Afraid of the Dark.

The film begins with 10-year-old Sally (Bailee Madison) arriving in Rhode Island from Los Angeles. The girl’s flaky, irresponsible, unseen mom has foisted Sally onto her contractor dad Alex (Guy Pearce) and his interior-decorator girlfriend Kim (Katie Holmes), who are living in a giant Victorian mansion while they’re renovating the place. Pissed-off and feeling unwanted, Sally becomes prey to the mysterious small creatures trapped inside the house, and when she sets them free, all manner of murderous hell breaks loose. 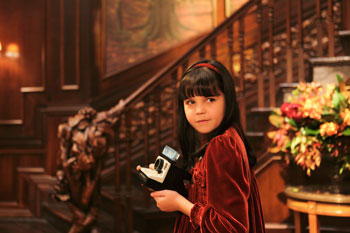 Director Troy Nixey honors the movie’s roots by mimicking the aesthetic of horror films made in America in the pre-Freddy-and-Jason 1970s. The colors are saturated but not overly good-looking (thanks to cinematographer Oliver Stapleton), the mansion setting is shadowy and stately, the music by Marco Beltrami and Buck Sanders is lush and orchestral. The anachronistic ’70s-vintage Polaroid flash camera that Kim gives to Sally is a nod to the period, and it also turns into an unlikely weapon in the story. There’s even an atmospheric shot of autumn leaves being blown by the wind, a visual cliché common to films from the period.

The one element here that doesn’t belong in a ’70s film is the CGI-generated creatures themselves. The script seems unsure as to whether the things are fairies or gnomes, but whatever they are, they’re not friendly. They’re typical del Toro creations, rather similar to the flesh-eating winged fairies we saw at the beginning of the director’s Hellboy II: The Golden Army. Those creatures were cuter and scarier than the ones here, but the latter are still the best thing in this movie. Their initial appearance is extraordinarily well-managed — they disturb things in Sally’s room before stepping into the half-light. It’s only when Sally comes face to face with one under her blanket that we see how horrifying they are.

But then, why doesn’t she just peel the blanket off the bed instead of crawling under the covers with a flashlight? The movie’s full of such nonsensical behavior, which is why it still fails to convince. If the mansion’s groundskeeper (Jack Thompson) is so concerned for the family’s welfare, why does he wait to warn them until after the creatures have carved him up with sharp objects? Kim is the first to take Sally seriously after the girl tells her parents about the fairies, and yet she’s strangely lackadaisical about getting Sally out of the house even after she’s had ample information about what the creatures are and what they’re capable of. Why is Sally reluctant to tell people outside the family about the fairies, even after they’re revealed to be malign spirits? And why does no one suspect that the creatures can hear the family’s conversations inside the house and plan their actions accordingly?

Haunted-house movies are often about families cracking up, a subject that screenwriters del Toro and Matthew Robbins address by making cursory references to Kim’s own bad childhood and Alex’s workaholic tendencies. As you can tell, that’s not good enough. No wonder the actors look lost. The movie falls well short of superior haunted-house films like Juan Antonio Bayona’s The Orphanage, Henry Selick’s Coraline, either of the Paranormal Activity movies, and even James Wan’s Insidious. (And that list is just from the last five years.) In spite of all its atypical trappings, Don’t Be Afraid of the Dark is simply a typically bad late-summer horror flick that doesn’t even unsettle, much less scare. Del Toro can’t half-ass these things; a project needs his full attention to have the style and power that we’ve come to expect from this extraordinary filmmaker.

Don’t Be Afraid of the Dark