As first reported in town in Blotch, The Moon has temporarily returned to its original West Berry Street location, starting Tuesday, fittingly for Tuesday-night staple Mike Richardson’s Big Mike’s Box of Rock. Of course, if you’ve been following the developments at the Ridglea Theater complex, you’ll be curious as to why Moon owner Chris Maunder decided to go back to his old spot, though some Zim Zimmerman-authored shenanigans related to parking seem to be the source (see: HearSay). Anyway, for the time being, we can all go back to getting drunk on Tuesday nights while Richardson, drummer Matt Mabe, and bassist Kevin Davis plow through note-for-note renditions of the songs you wish KZPS would actually play — i.e. “No Quarter” instead of “Open Arms.” 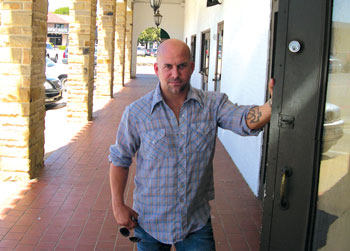 Frankly, I’m glad to see the bar in its old digs again. Nostalgia aside, I really missed seeing Box of Rock on the reg. Sure, they play at Tolbert’s in Grapevine often enough, but I tend to get a little, um, shotty during particular songs, and Grapevine is a looong way to drive, especially if “Paranoid” and “Funk #49” are in the last set. Better still, The Moon’s reopening means that Mike can keep the gig he had booked there for Friday, Dec 9, a Black Sabbath tribute night. The last time they played, I’d booked them at The Moon for my 29th birthday. I remember Maunder worrying that no one would come to see a Sabbath tribute, but I didn’t really care — I just wanted to hear “Electric Funeral” sung live, probably better than if Ozzy had shown up himself. I watched a video of the last time the real Sabbath got together, and it kinda sucked. Richardson’s Sabbath tribute is pretty faithful to the source material (though he adds a second guitarist), basically blowing through the band’s classic catalog, even hitting the highs found on late ’70s albums like Sabotage.

I applaud The Moon’s ability to defy dormancy and hit the ground in fourth gear. Maunder has a DJ and a band of TCU kids already booked for Thursday, and he’s already getting solicitations for the rest of December. Whether he ends up moving to the Ridglea complex or elsewhere remains to be seen, and I am a little curious about what’s happening over there, because the other bar opening in the Ridglea complex, The Ridglea Bar, is already advertising shows for January: a bunch of heavy bands, from the looks of things. Never say die, I guess. –– Steve Steward

Not So Strange Brews

I am not a fan of winter, but I’ll allow that for all the shivering and civilization-ending ice storms on the way, Fort Worth’s frigid months mean that Rahr & Sons Brewing Company brings out their best. Or my favorites, anyway. Rahr’s Winter Warmer is already selling out all over the place, and the first batches of this season’s Iron Thistle have already been brewed. If you like your beers thick, dark, and chocolaty, keep an eye out for both of these at your favorite taphouse/friend’s refrigerator. Or you can get a taste by taking a tour of the brewery, held Wednesday evenings and Saturday afternoons. –– S.S.

Only a handful of people will probably care/bother to play, but Lola’s Saloon recently acquired a Galaga/Pac-Man arcade cabinet, joining the Chat Room and Barcadia on the (entirely too short) list of Fort Worth bars that give you a reason to carry around a pocketful of quarters or order drinks that cost $3.25. Normally, I’d advocate putting the change in the tip jar, but that’s what singles are for. Use the silver to beat my score. My initials are SSS. –– S.S.