If a pawnshop is enough to scare you away from a neighborhood, you might never work up the courage to walk through the door of Cancun Restaurant, on the south side of Camp Bowie West. And that would be a shame.

Sure, the outside of the restaurant is a little dilapidated, but as far as I know, nobody has ever eaten a facade. Inside, Cancun is very pretty: Soft lighting falls on vaguely Mexican decorations on ochre walls, and the tablecloths are made of fabric. The atmosphere is classy enough to make Cancun a good date spot, the kind where it’s OK to put on cologne and a nice jacket. 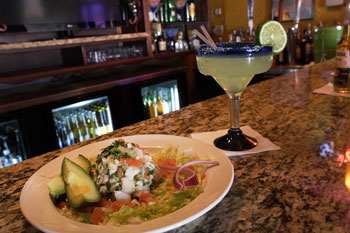 You could just as easily wear a t-shirt and jeans, though. Like Cancun’s décor, the menu walks the line between casual and fine dining. As its seaside namesake implies, Cancun serves mariscos –– such as ceviche and caldo marinero, a stew of octopus, mussels, and squid –– and also some shrimp plates. But hankering for some red meat, I skipped Cancun’s seafood offerings on my first visit and went with the carne asada dinner: a sizable piece of flank steak served with rice, beans, and guacamole.

For me, a carne asada is best when it’s the tiniest bit crispy, and Cancun’s lightly spiced steak was just about perfect. Each bite was juicy and savory, not quite fork-tender but never so chewy as to distract from the flavor. I had to stop myself from just inhaling the whole thing. Swallowing the last bite, I even contemplated going back and ordering two more steaks sans the side dishes.

On my next visit, I went with the Popeye Enchiladas. Filled with cooked spinach and grilled onions and covered in a poblano cream sauce, the Popeyes were exactly what I wanted: a full meal that wouldn’t make me sluggish. When my server placed the plate in front of me, I chuckled because it looked like a flag — the enchiladas, topped in the light green poblano sauce, were flanked by beans on one side and rice on the other, and I wondered what country’s colors were brown, green, and orange. But then I took my first bite. The spinach was still a little crisp, and the onion flavors were subtle enough to allow the taste of the greens to come through. The enchiladas would’ve been even better if the spinach had been rolled up with some grilled zucchini or yellow squash — of course, I don’t know if Popeye eats those things. The poblano sauce could have been a little bolder too, but overall, this is probably one of the best vegetarian plates you can find in town, especially at a Mexican restaurant.

I went back a couple of days later to try the lunch specials. I was tempted to order carne asada again, but the food reviewer’s duty called, so I ordered the puerco en chile rojo. The pork, lightly fried in a guajillo chile sauce, was wholly delectable, the sauce spicy without being scorching. I just wish there had been a little more pork and a little less rice.

Cancun’s only so-so note was the salsa. It was fresh and better than what comes out of a jar, but, compared to the versions served at a lot of other Mexican places, this was pretty bland and heavy on the tomato flavor. I still ate two little bowls’ worth of the stuff with a whole basket of chips, so take my opinion with a shaker of salt.