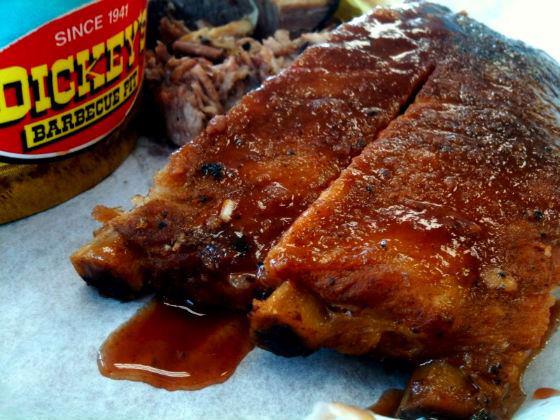 People in search of the holy grill — as in barbecue — slobber all over themselves when praising Angelo’s.

No problem with that. Angelo’s rocks.

Daniel Vaughn, the new “barbecue editor” at Texas Monthly, was recently interviewed by Startlegram food critic Bud Kennedy, who wanted to know how Angelo’s compares with the best.

“I think Angelo’s is one of those places that holds up,” Vaughn said.

Hmmm, not exactly an effusive endorsement. But, after all, Vaughn is known as the “BBQsnob” on his Full Custom Gospel BBQ site.

Also, he’s eaten at more than 600 barbecue joints so it must take something special to get him excited.

However, there’s another joint not far from Angelo’s that Grub Buddy likes even better — Dickey’s Barbecue Pit on University Drive.

Hear me out. When Dickey’s gets it right, their meat is comparable to Angelo’s.

Regardless, this is Grub Buddy, and anyone who knows Grub Buddy knows that large portions and low prices are equally as important (okay more important) than food quality.

The lunch specials at Angelo’s are priced about the same as the specials at Dickey’s, but with several important differences.

And, best of all, Dickey’s lets you spoon your own sides onto your plates.

When spooned correctly, a single lunch special of brisket, macaroni, and green beans could feed an entire village for two weeks (or satiate Grub Buddy for a couple of hours).

Tipping isn’t even required at serve-yourself barbecue places — so for about $9 you can eat enough food to kill a small child.

P.S. No children were actually killed during research for this column, but several arteries were seriously clogged.