Back in the 1990s, the Arlington Museum of Art was home to exhibitions as bold and innovative as any in North Texas, but after the departure of director Joan Davidow, the place became something of an afterthought compared to the Fort Worth art museums. This weekend, the institution looks to seize the spotlight once again with its new exhibit, Ansel Adams: Masterworks.

Born in California in 1902, the photographer did as much as anyone to elevate the medium of photography to a widely accepted art form, taking magnificent pictures (mostly of the black-and-white variety) of the natural landscapes in the American West. Though Adams wholeheartedly embraced the environmental movement that blossomed during his lifetime and saw his work as a means to preserve nature, he always insisted that aesthetic beauty come first in his photographs. This is why, in their time, his works were displayed in galleries and museums that had been reluctant to hang photographs on their walls the way they had done with paintings.

Admission to the show isn’t free, as many of AMA’s previous shows were, but the $8 ticket price seems eminently reasonable, given the admission fees for blockbuster exhibits at most other North Texas museums. 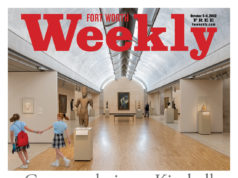