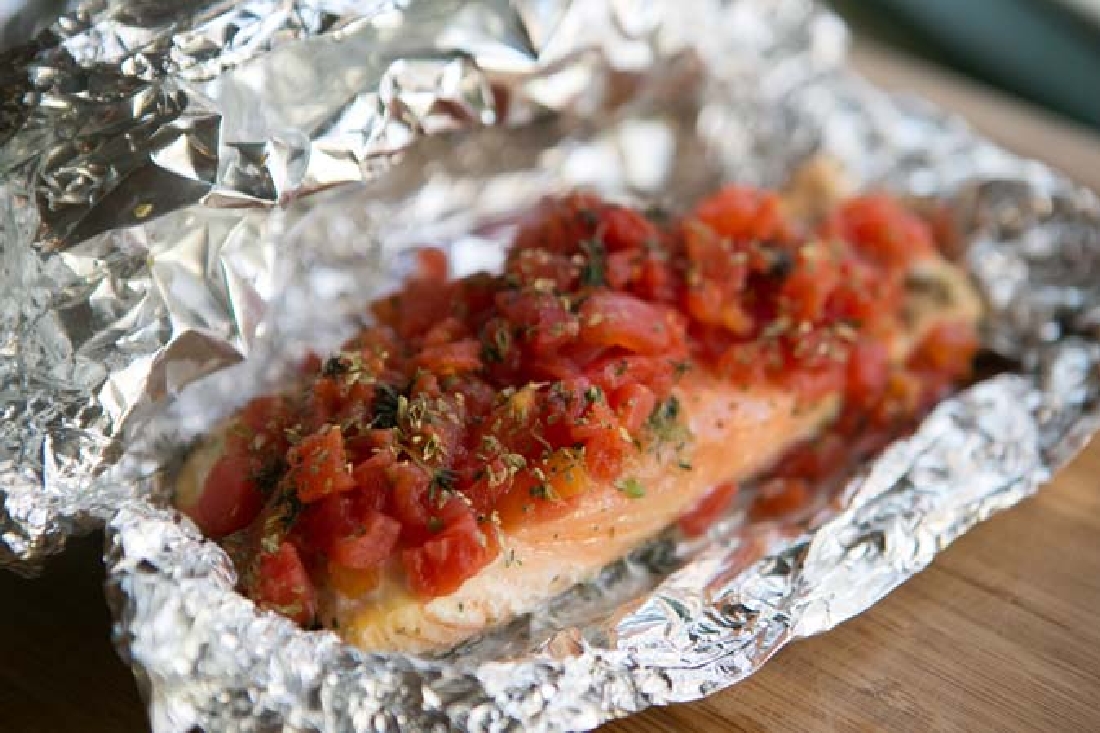 Two of my dreaded … that is, my beloved nieces, ages 10 and 12, came over to Casa de Chow, Baby for dinner recently. Their mother, my dear ol’ sis, has the two monsters well on their way to childhood diabetes, thanks to a steady diet of fast food and soda. I wanted to show them that eating healthy and cooking can be fun, so I involved them in the process of making dinner, in the hope that they’d get hooked on the natural high of steamed veggies and well-seasoned fish. The problem was they couldn’t stay off their space phones long enough to chop an onion.

Instead of getting grumpy about their near-vegetative state, I chose a recipe that allowed them time to indulge their slavish devotion to crushing candy and checking Twitter. I call this recipe “An homage to Giada De Laurentiis,” or “TweetFish with Tweens.”

I built social media and iPhone breaks into the recipe so we could get through the preparation without stabbing one another.

Preheating the oven to 400 degrees, for instance, gave the two enough time to play a few games of Candy Crush, and they each took the “Which Member of One Direction Are You Meant to be With” quiz on Buzzfeed.

The next step was to chop three or four tomatoes after scooping out the insides and to finely chop two shallots. That was the toughest task of the whole exercise, because they actually had to (a) put down their phones and (b) stop looking at the screens to avoid mincing those all-important fingers they use for scrolling. I promised them they could watch one cat video after everything was chopped. (I secretly watched it too. Uh-dorable.)

There wasn’t a dry eye in the kitchen after we watched another video, of a flash-mob marriage proposal, while sprinkling the salmon with olive oil, salt, and pepper. Then, in a medium-size bowl, the gals stirred the tomatoes, shallots, olive oil, lemon juice, oregano, thyme, salt, and pepper, while occasionally stopping to check out teeny Vine videos of skateboard crashes.

We placed the salmon in foil and spooned the tomato relish over it. The tweens took at least 400,000 Instagram photos of the process, which also involves folding the foil over the fish and relish to seal it.

Then they placed the foiled fish onto a cookie sheet, and let it bake for 25 minutes –– or, in the tweens’ social media zombie world, an eternity. That gave them enough time to watch a Hulu video of parents lying to their kids about eating all of the Halloween candy, retweet 19 inane, squeal-inducing tweets by the One Direction lads, take several selfies for Instagram while tagging half the Western Hemisphere, and watch a YouTube video of an ’80s workout video set to a Taylor Swift song.

When the last leotard went still, I took the plump, perfectly cooked salmon out of the oven. We ate in total silence while the two continued to text, scroll, and snap pictures of everything.

The good news is they liked the dish and seemed to enjoy the cooking process. I hope our little afternoon in the kitchen will be a turning point leading them to a healthier diet. Maybe they’ll even put down their phones for two consecutive minutes. Or maybe I will take a cleaver and make an Apple salad out of their phones and serve it to them with a nice Chianti.