Unless the heavens favor you early on, I think the trajectory of a band’s touring life goes through four different phases. There’s usually that moment after you’ve recorded an album and seen that people outside of your immediate social circles have bought it. You think, “Hey, maybe there’s someone in Austin who will give us $5 for this CD too.” And so you book a show somewhere, maybe in Austin, maybe in Houston, maybe in Oklahoma City or Little Rock (or Sacramento, Las Cruces, Wichita, Memphis, or any other mid-sized market or bustling college town that’s fewer than several hours away from your home base). They’re regional cities that are home to clubs and scenes that resemble the ones in your hometown. And then you caravan. 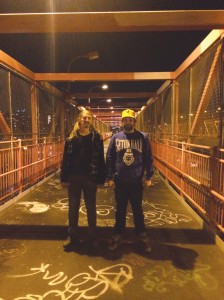 Caravanning, or when you have to take more than one car, happens when you or someone you love still maintains a “don’t quit your day job” attitude about playing music but believes in your band enough to pester clubs and booking agents to put you on their calendars. It’s kind of a non-committal way of exploring your band’s viability as a career choice. You end up crashing with an out-of-town friend or relative and go home the next day. With Darth Vato, I was exceedingly grateful to get out of this stage. I don’t mean to sound like a dick, but caravanning makes me suspect your band is still crewed by hobbyists. There’s certainly nothing wrong with that, and in the end, you and your mates will probably be happier, wealthier, and better adjusted from playing music purely for enjoyment.

But let’s say you and your band catch the touring bug from caravanning out of town and decide to take it to the next level, where you decide to travel together in a single vehicle. Typically, that’s when you add another city to your road trip. If you do this long enough (either because your band legitimately develops a following, you are impervious to failure, or you’re a glutton for punishment), you enter what I like to think of as the Weekend Warrior phase. It’s the phase when most bands get a van.

Here’s what sucks about the Weekend Warrior phase: You can potentially be stuck in it forever. No matter how much you play, you still have to work a day job and probably a night job as well. If I’m being honest, I’d say the two bands I play in the most — Oil Boom and Son of Stan — are Weekend Warriors. All of us have at least one job outside the band, and Oil Boom drummer Dugan Connors had two jobs (one full-time, one part-time) until fairly recently. Since he has a wife and kids and books and manages the band, I’d argue that he really had four jobs. For me, besides playing music, a part-time job in its own right, I tend bar and commit freelance journalism. They’re mostly easy jobs that I mostly enjoy, but I’d rather only have to do the one where I play bass.

Weekend warring is generally enjoyable and often profitable. By the time your band hits this stage, you’re probably selling merch and maybe even have had wider exposure and extra cash in the band fund from a synch, though unless your song is in the background of an Apple commercial, you probably aren’t, you know, rollin’ in it. It’s the phase of the game in which you really learn whether you’re a careerist or someone who just likes playing music. The road trips expand from two days to three or four and then to week- or two-week-long runs. You might even have found a booking agent at this point or the pseudonym you use for your booking e-mail has convincingly fooled enough people that getting shows isn’t as hard as it once was. If you’re lucky or your collective personal overheads are low enough, your band can transition from Weekend Warriors to Road Dawgs.

Road Dawgs are what I like to think of as those bands that headline Lola’s Saloon or Club Dada every couple of months –– Diarrhea Planet, Gringo Starr, Valient Thorr, Jeff the Brotherhood, um, Tim Reynolds — the kinds of acts that have a van and a fanbase and bring along a merch person and maybe even a tour manager. Most of the members of these groups probably still have jobs, but they’re out of town as much as they’re at home. Road Dawging can go on forever, too, but ultimately, it’s a better spot to be in than Weekend Warrior.

Finally, after many years or a rapid ascent, there’s the Bus phase. I know very little about this phase other than that buses are expensive and, according to Dodson, who plays in country troubadour Steve Helms’ band, having one seems to be a principal goal for Texas country acts. During the first week of June, Oil Boom booked a six-day tour (five gigs total) around two shows opening for veteran Dallas cowpunks the Old 97s. One was in Englewood, Colo., and the other was in Omaha. They traveled in a tour bus, and while we marveled at the expense (a bus and driver can easily cost upward of $1,000 a day) we were even more wowed by the phenomenon of departing one city, falling asleep to the whir of wheels, and waking up in a completely different city some seven hours away, as if Nebraska’s interminable sameness didn’t even exist.