Nebraska’s boring landscape (and Kansas’ and West Texas’, for that matter) does, in fact, exist, and staring at it out a car window for a whole day is but one of the many minor drags you experience on the road. Diner food is another. When I was younger and obsessed with “We jam econo,” the philosophy of seminal indie rockers The Minutemen –– the idea that a band can be your life (i.e. you can break even or come out a little on top) if you’re willing to tour as austerely as possible — we brought along a cooler filled with sorta healthy food (apples, string cheese, sandwich materials, Seagrams 7) instead of eating at IHOP five days in a row. But you have to be committed to that particular bit, and, frankly, I hate waterlogged sandwiches. Because Oil Boom is a lot more profitable than Darth Vato ever was (Dugan aggressively pursues payment guarantees), we end up eating a lot more garbage. When I got home from tour last month, I became a vegetarian for almost three whole days. 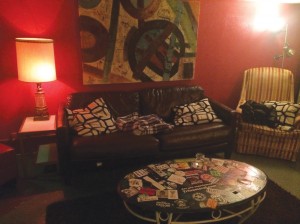 Then there’s the partying. Unless you’re straight edge or whatever you call a grown-up who abstains from recreational intoxication, you probably drink a lot more on the road. I certainly do. I’ve backed off a bit as I’ve gotten older, but in the time I spent touring with Darth Vato, I put on more than 30 pounds. While I can blame a lot of that blimping on a shitload of Whataburger, I also guzzled a commensurate amount of beer, because what happens when you tour is this: You spend a long time getting to a place where you have to immediately load in and then sit around in that place for several more hours until it’s time to play. You’d think that going to another city would include “touring” said city’s attractions, but unless you have a day off, you’ll probably see no more sights than the ones within a couple blocks of the club. And they’re usually just more bars.

Still, sitting around some bar in Tulsa or Baltimore trying to maintain sobriety while waiting for 10 p.m. to roll around is preferable to sitting in some office waiting for your boss to leave so you can duck out early. But even a day off from playing shows is pretty magical. Last October, Oil Boom and Son of Stan toured together (sharing a van and a bass player — me, as it happens) for two weeks, zigzagging back and forth across time zones, going north through the Midwest to Chicago and east to the mid-Atlantic via Ohio and New York. We had a day off in St. Louis, where we ate St. Louis’ peculiar local pizza (it’s topped with a processed cheese called Provel that’s pretty disgusting) and visited the City Museum, a sprawling installation in an old building that’s sort of like a jungle gym for adults. We had another night off before playing Baltimore, so we spent it wandering the Capitol Mall, closing the evening out at this little bar in Georgetown where a gorgeous DJ spun vintage soul and R&B 45s. She’d hung a banner that prohibited requests, and I thought that was really smart. 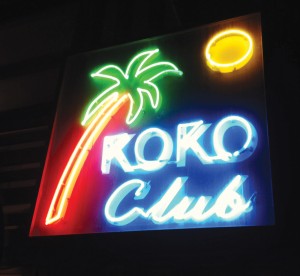 In truth, while I gripe about how you don’t really get to see a city on tour, you still get fascinating glimpses of new places. Realizing that we were passing near Druid Hill, a location popularized by HBO’s Dickensian Baltimore-based crime drama The Wire, I got a little chill up my spine, though that may also be because West Baltimore is 100 percent real and pretty fucking scary. But the next day, we headed to Annapolis, where we stayed with a friend and his wife. He grilled oysters pulled from a creek less than a mile away and some steaks. Apart from watching TCU blow that game against Baylor, it was a pretty amazing afternoon, and the show that night was probably the most fun of the whole trip.

Those instances, where you meet people who are awesome and generous and kind (and who can help you replenish your weed stash) are one of the non-monetary boons of touring. Yeah, you meet a few assholes along the way (the Bible Belt is lousy with them), but more often you interact with folks who are genuinely nice. So while touring can be boring and expensive, it’s mostly a rewarding experience seeing new scenery (even Nebraska was new and mildly interesting for about 10 minutes) and meeting new people. 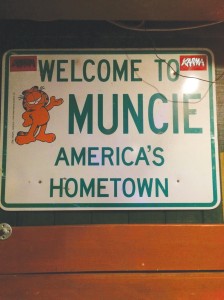 Apart from playing shows to an amenable crowd that makes the energy palpable and exciting, the other thing I like about touring is what I tend to think of as The Gnar. I define The Gnar as an unpredicted incident that makes for a good story later. The Gnar is equal parts bar fight and car accident. It’s the sketchy chick trying to get into someone’s pants who also wants you to drop her off somewhere 40 miles in the opposite direction of where you’re headed. It’s the line cook at the Waffle House who would make Danny Trejo go somewhere else. Usually, it’s a bar fight.

My all-time favorite Gnar moment came from this time Darth Vato played in San Antonio at this punk rock bar called Jiggers. We’d opened for this now-defunct band from Austin called the Oklahomos, who had a sizeable fanbase among this group of non-racists skinheads called the Smash Crew, and a bunch of those guys were happily drinking and casually moshing. Dodson and my girlfriend and I were all sitting on the rail of the pool table watching the band when, from behind us, I heard someone call someone else a “Nazi piece of shit.” I turned around just in time to see one of the Smash Crew guys smash this other skinhead in the forehead with a High Life bottle, after which the bouncer presumably saved the guy’s life by grabbing him, bleeding head and all, and shoving him out the door. Exciting, right? And we sold a bunch of t-shirts, too!

Other Gnar moments: Darth Vato’s second van, the S.S. Erin Gray, jettisoning its drive shaft onto an on-ramp headed onto 290 South in Austin; Connors literally fixing a broken gear shift (Oil Boom travels in his 2011 GMC Envoy) with gaffe tape or, a month prior, chasing some knucklehead through Malibu traffic after the dude clipped the driver’s side mirror of our rental car and drove off. There are the crusty old hillbillies yelling at you to play some “Got-damn blues!” and Zaq, our merch guy, and I sprinting five blocks to make it to a weed dispensary in Colorado before it closed. That wasn’t gnarly as much as it was hilariously pathetic, but it’s still kind of a funny story.