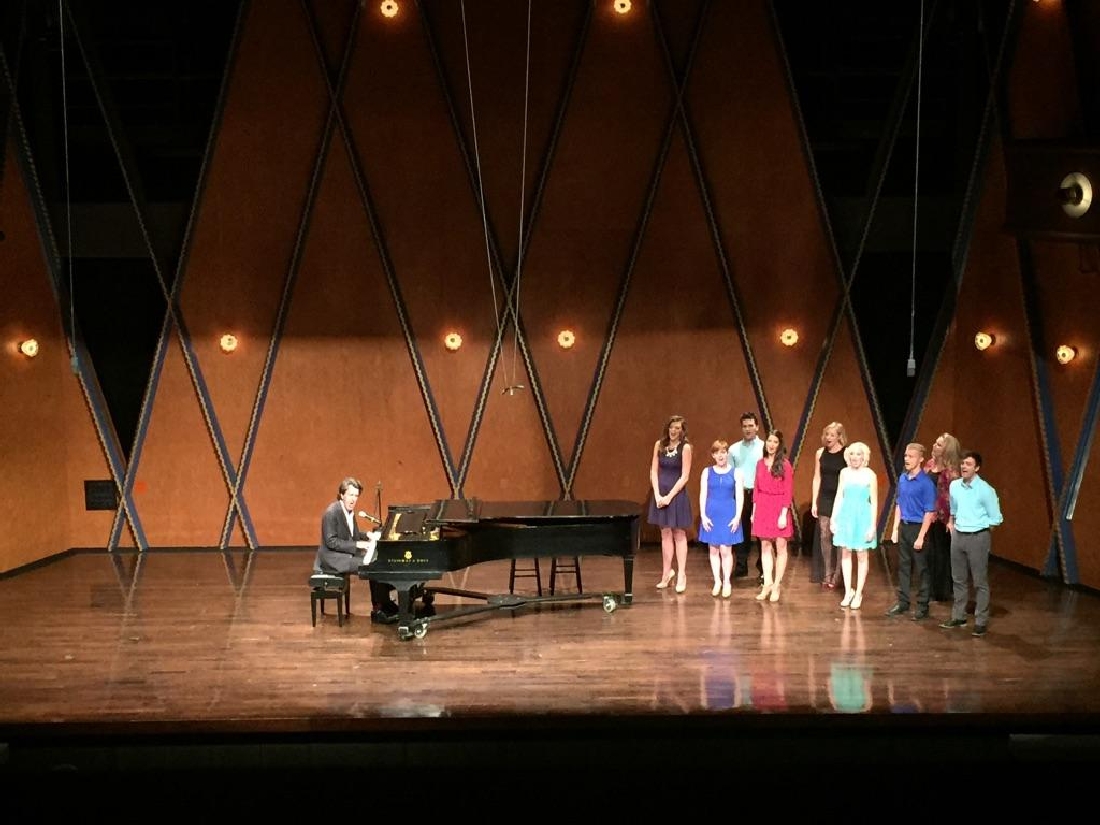 Sunday’s finale to TCU’s Festival of American Song was remarkable for several reasons. First, the audience was a lively mix of all ages, defying stereotypes about classical music fans. Second, the works of guest composer Jason Robert Brown captivated everyone throughout the afternoon. And third, a highly anticipated cameo performance by Brown did not disappoint.

The nearly two-hour performance never had a dull moment. After a short introduction from the festival’s principal curator and festival founder Angela Turner Wilson, the ensemble of eight vocalists and one pianist opened with an energetic rendition of “Brand New You” from the musical 13. At the piano, Van Cliburn Foundation artistic adviser and Fort Worth Symphony Orchestra pianist, Shields-Collins “Buddy” Bray handled Brown’s thick, pop-rock style gracefully. Bursting onto the stage while dancing and jiving, the complete ensemble of eight vocalists emphatically belted the tunes’s uplifting harmonies and beat-boxing rhythms, with solos from mezzo-soprano Caroline Iliff and soprano Kylie Arnold (who were both making their festival debut), and soprano Jenna Meador. For most of the remainder of the show, each of the performers (mostly veteran performers and TCU students and alumni) sang solos or duets selected from a range of Brown’s greatest hits.

One of the youngest musicians in the ensemble was tenor Luke Atkinson. His renditions of “Shiska Goddess” from The Last 5 Years and “My Name is Archie” from 13 affably embodied the unassuming underdog quality in those characters. Atkinson made full use of his earnest and soulful voice. One of the most dynamic theatrical performances came a la tenor Kyle Montgomery, whose charming, comedic pace perfectly embodied the bumbling and hopeless romantic scenarios from The Last 5 Years and Honeymoon in Vegas. His agile vocals effortlessly maneuvered from speaking to belting and back, all within a few bars. As Montgomery remarked after the show, the wide range of moods he portrayed were straight from the score.

When working with Brown’s work, “everything you need as a singer and an actor is on the page,” Montgomery said.

The last four songs were particularly affecting. A beautifully pensive performance by Wilson on “Stars and the Moon” from Songs for a New World left the audience hanging onto the singer’s every word. Wilson’s rendition was followed by a riveting solo and duet from Brown’s controversial musical Parade performed by soprano Shelby Ringdahl and tenor Anthony Fortino, respectively. Parade is a dramatization of the very real 1913 wrongful conviction and lynching of a hardworking man who is an outsider in his town, and in the current climate of such violent xenophobia in our culture made the selection poignant and relevant.

In the song, “You don’t know this man.” Ringdahl, who plays the role of the accused’s wife Carolee Frank, passionately pleas in private that he is indeed not a murderer.

“You don’t know this man,” the character sings. “When a man writes his mother every Sunday, pays his bills before their due, works so hard to feed his family, there’s your murderer for you.”

The concert concluded with a highly anticipated cameo from Brown who joined the entire cast on stage for a rousing rendition of “Music of Heaven,” from Brown’s stand alone studio album, Wearing Someone Else’s Clothes. The ending reprise of the song, with the whole cast repeating “Holy Father!,” kept the audience rapt with emotion.

After last year’s performance, the festival received mixed reviews. The Festival of American Song’s sophomore effort was well-executed and entertaining. Its high caliber of performers and guest composers should have audiences already counting the days until next year’s festival.