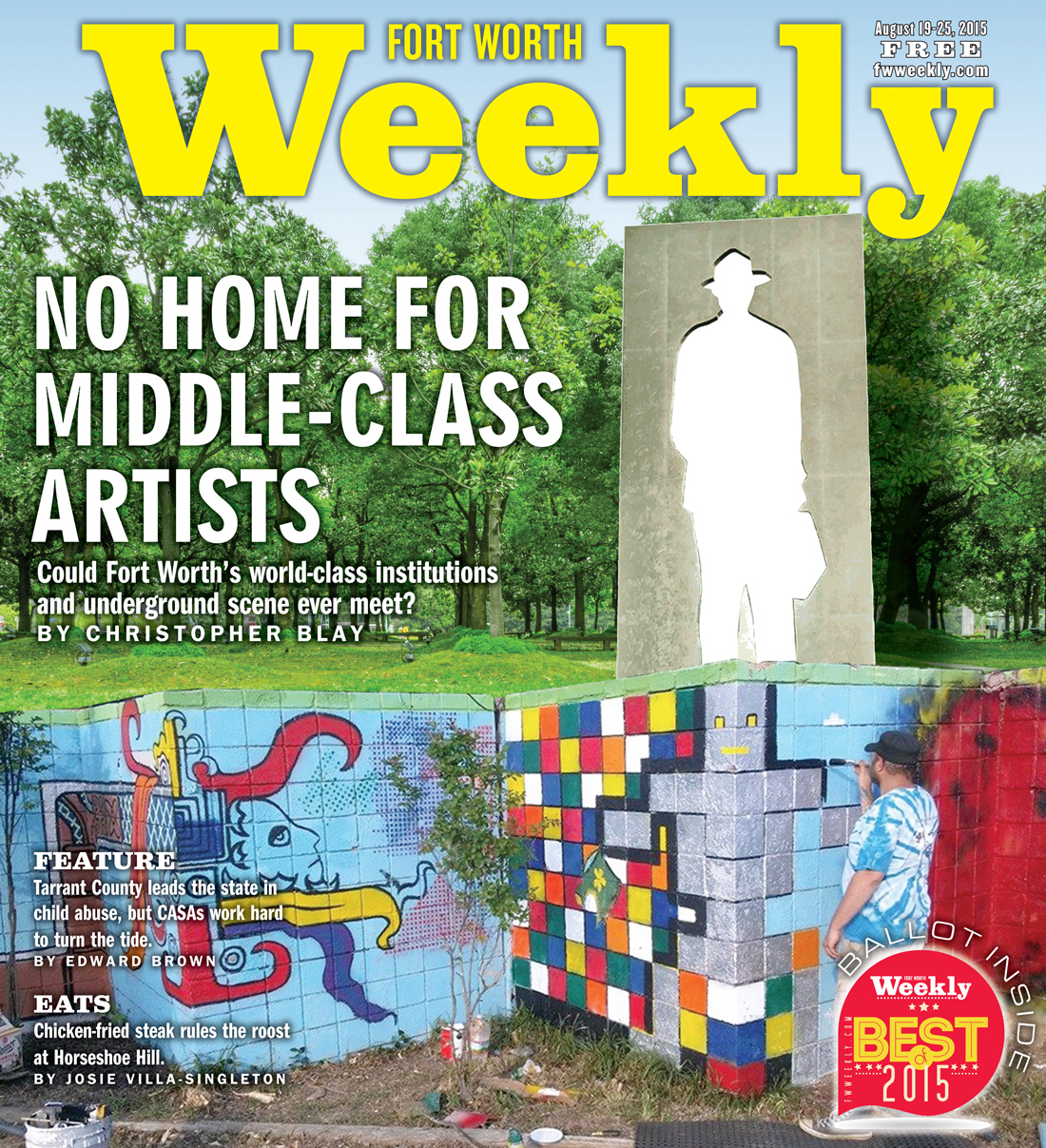 It’s the middle of summer, and most summertime exhibits at the museums and galleries are about to come down. Artists have retreated to their studios to create new works for the fall, so now is the perfect time to talk about where the visual arts in Fort Worth are headed.

Fort Worth occupies space at both ends of the exhibition spectrum. Spring and fall Gallery Nights, Arts Goggle on the Near Southside, and Main Street Arts Festival all contribute to the city’s rich festival culture. And are most residents’ only experiences with art. There are no white cubes, and you can carry your turkey leg and beer as your kids run ahead of you. At the other end of the spectrum are the Kimbell, Modern, and Amon Carter museums. Visitors at these institutions are transported to a space that seems to leave Fort Worth behind and connect it with a culture that has a stronger connection to the international world of art. Together they create the triangle at the center of the visual arts community in Fort Worth.

Our city’s model exposes a hollow middle just outside that triangle that could be filled with more galleries, more support for artists who have a strong studio practice, and more art spaces that bridge the gap between the city’s galleries and museums.

Our full-time art galleries (not counting shops or other businesses that exhibit art as well as hold classes and workshops) can be counted on one hand. They represent artists and have a strong interest in building a relationship between artists and patrons. Galleries work tirelessly on behalf of the artists they represent, and this model is so important to the visual artist that without it, there are few proven ways an artist can get enough sales or recognition of his or her work.

Artspace 111, for example, boasts some of the best artists in the city. They include Nancy Lamb, Dan and Dennis Blagg, John Hartley, and a few others. The gallery, however, is almost entirely focused on this core group of artists and can be seen more as a studio-run space than a traditional gallery. And to their credit, they make it work.

William Campbell Contemporary Art is another example of what’s working in Fort Worth. Although they are the oldest gallery in town, they’re also the glue that holds together the local art scene. They seem poised to take more chances and support more artists outside their traditional circle of neo-abstractionists. At least this is my hope. Regardless, we would be hard-pressed to find a privately owned art space that’s more vital to the city.

However, to grow and sustain the visual arts in Fort Worth, we need a variety of models. And more of them. Gallery 414, in the shadow of the Cultural District, is a good example of the possible future. A small house on Templeton Drive, it was converted into a studio, and eventually a gallery, in 1995. Founded by the late Bob Fiesler and supported by Razz Fiesler, the space has been run as an alternative, noncommercial gallery by artist Hartley since its inception. It is a model that could be replicated and expanded upon for the benefit of a lot more artists than 414 currently serves.

Another exhibition practice to recently emerge is Fort Work Arts, a satellite gallery formed by artists Lauren Childs and J.W. Wilson. They’ve had a few exhibits in the space behind Shipping & Receiving, near South Main Street on the Near Southside. Another group show in that same space, Bobby on Drums, co-founded by artists Jay Wilkinson, Jeremy Joel, and others, brought together a strong group of professional and emerging artists. I missed the opening reception, but the show I saw a few days later was definitely a harbinger of the art yet to come in Fort Worth. The expansive space was full of paintings, sculpture, and new media works. But a few standouts are worth noting. The giant, lifelike, Ron Mueck-esque sculpture of a reclining man in a hoodie by Jay Wilkinson, and the interactive sound installation by James Talambas come to mind.

Over the past several months, there have been a handful of other art happenings and pop-up art events around the city, involving some of Fort Worth’s best talents. Jesse Sierra Hernandez’s Studio 4, connected to the now-defunct legendary Wreck Room, and Matthew J. Sacks’ Grackle Art Gallery are a couple of others that also deserve recognition. The latter has an underground flavor with artists like Mark Penland and others who thrive under the radar of most galleries.

I am concerned, though, about exhibitions like these, ones that combine art, music, and bars. One of the arguments supporting the development of an art scene or happening of this kind is that it creates the kind of raw energy and pulse that fuels the discovery of more artists and makes the city a more vibrant art community. The downside is that the scene-makers are seldom rewarded for their energy and often leave town to live in more robust art communities. Or labor away without any strong institutional support. This leaves the emerging artist without a way to develop a strong studio practice because his or her energy is spent on entertaining rather than engaging and challenging the community.

Photographers like Diana Urbina, whose poignant vignettes of her personal social scene are equal parts Nan Golden and Mary Ellen Mark, has a strong enough body of work to succeed at any gallery. The same can be said of Fort Worth’s other great photographers, Loli Kantor, Mark Penland, and Paul Thomas Leicht, the undiscovered Henry Dargers and Vivian Maiers of Funkytown. And one of the most glaring absences from any of the city’s galleries is realist painter Hernandez. Although a solo exhibition of his work will be at 414 in October, a forceful argument can be made for a more permanent home for his paintings and their strong social commentary.

But the problem with proposing specific remedies and prescriptions for what ails Fort Worth’s visual arts is that what often works for one city often doesn’t work for another.

Fort Worth needs its own solutions, but there are models and frameworks that seem to be part of all thriving art communities. The biggest is that there’s an element of financial support from multiple sources in the form of grants and awards for individual artists. Fort Worth has a handful of such opportunities, like the Art in the Metroplex prize from TCU’s Moudy Gallery and the Fort Worth Weekly’s Visionary Awards.

There’s also the encouraging new initiative from Megan Carol Henderson of Fort Worth South Inc. ArtSouth is described as “an innovative artist residency program offering studio space, a project stipend, and public art exhibition space to selected artists.”  The stipend includes $3,000 for the project and $1,000 for the artist.

But drive 12 miles northeast. The Arts Council of Northeast Tarrant County offers grants of up to $3,000 to individual artists. A little farther east on I-30, Dallas offers no fewer than eight grants to individual artists, none connected to a nonprofit organization. They include the Dallas Office of Cultural Affairs’ $1,000-$5,000 grants, SMU Meadows Museum’s $2,500 Moss Chumley Award, the Nasher Sculpture Center’s $1,000 microgrant, the Dallas Museum of Art’s $1,000-$6,000 artist grants, and the Dallas Observer’s $1,000 Mastermind Awards.

And these are just some of the ways we could start developing a stronger middle class of artists to bridge the gap between the festivals and the museums. We could also revisit the Fort Worth Community Arts Center as a possible location for an international artist-in-residence program. Or look at small-scale public art projects. Or ask the museums (at least the Modern) to shine some light on Fort Worth’s middle-class painters and sculptors and installation talents.

Artists would rather make art full time than not, and although these ideas won’t allow them to quit their day jobs, they may go a long way toward encouraging artists to take chances on works that may not sell and engage us in ways that put more culture in our “Cowboys and Culture” slogan.

Ed. note: In the previous version of this story, the co-creators of Bobby on Drums were not credited. We regret the error.