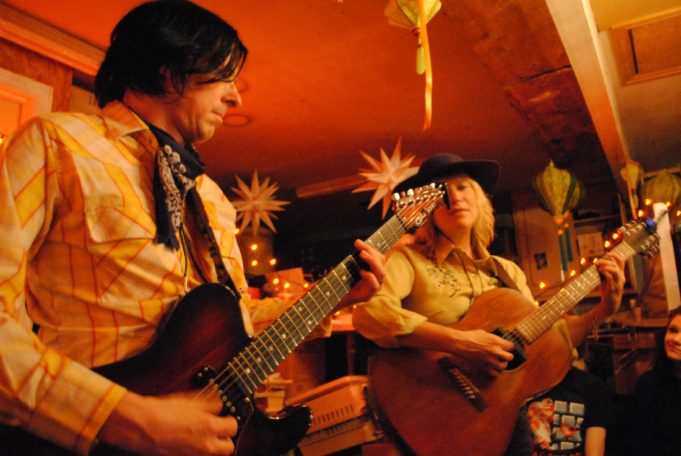 The never-ending rain on Friday didn’t damper an electrifying set by Ken Stringfellow and Holly Muñoz at a house show in Hurst. Stringfellow, best known for his work with The Posies, Big Star, and R.E.M., shared the stage with Muñoz, an up-and-coming singer/songwriter from El Paso. The two played to an audience of about 20 onlookers in a small garage near Precinct Line Road.

With the rain coming down in the background, the pair delivered a solid two-hour set of material from Ken and Holly: The Record, the duo’s “country opera,” while also taking turns performing songs from albums they released either as solo artists or with a band.

Surrounded by orange lights, dining room chairs, and half-empty bottles of wine and beer, the two traded stories about what their songs were about. Even though Stringfellow and Muñoz had just arrived from a 10-hour drive from Memphis in a torrential downpour, they appeared energetic and happy to perform. Their stories didn’t go on too long or come across as arduous. It was clear they were serious about the material, but they wanted to play as much as they could and have fun, too. This was a party, after all.

Although they were decked out in button-down western wear, the duo didn’t pretend to play country music. It was more folky pop with some vintage country-esque guitar leads. Stringfellow’s natural ability to harmonize worked with Muñoz’s voice, blending constant sweet sounds that matched well with the open chords being strummed on guitar. The tunes were mostly about people drifting across the United States, including one about getting high on Space Mountain at Disney World. But you didn’t have to completely buy into the stories to enjoy the songs. And as enjoyable as their originals were, Muñoz did a great rendition of “Edelweiss” from The Sound of Music as a bonus.

Instead of leaving for an encore, they kept playing. Muñoz did previously-released material from her debut solo album and stuff from her next one. Stringfellow treated longtime Posies and Big Star fans to moments they will never forget. When he busted out “You Avoid Parties” from the Posies’ classic, Dear 23, it was goosebump-inducing. He never holds back when he performs live. It sometimes appears like he’s trying to break his instruments and destroy his voice, no matter the size of the audience. Seeing it so up close was a magical moment. He originally wanted to end with “Down Like Me” from his solo album, Touched, but decided instead to play two more tunes, so the night wouldn’t end on a dour note. He covered the Smiths’ “That Joke Isn’t Funny Anymore” and Big Star’s “I’m in Love With A Girl” to the crowd’s enthusiastic approval.

House shows continue to be a welcome alternative to concerts in bars and arenas. Seeing a major act like Stringfellow in that intimate setting not only made his performance more personal, but it forced the audience to engage with their fellow concert-goers, which made the whole shared experience a little more special