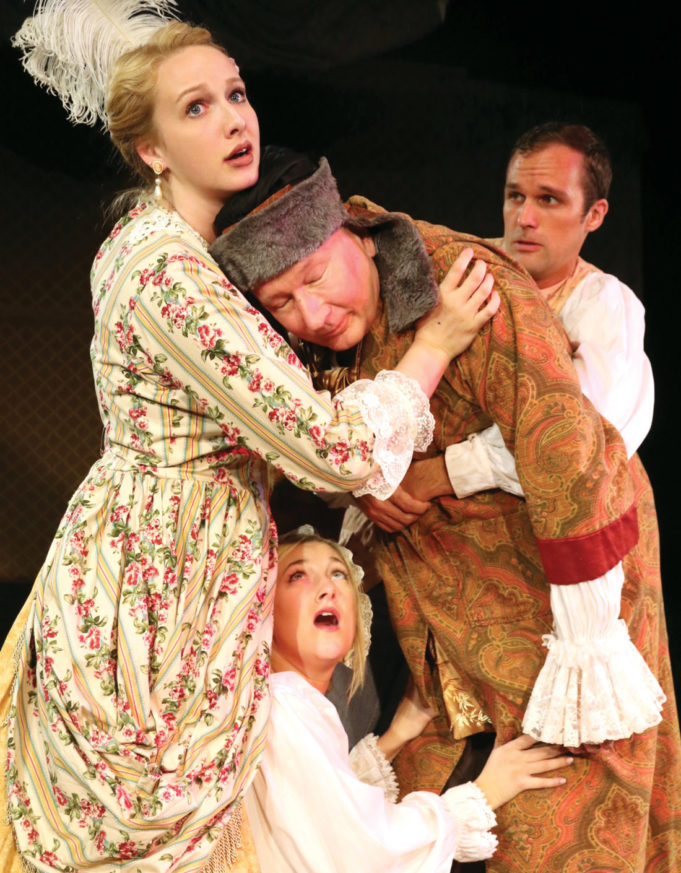 Wed 11 – The six musicians who make up the Chicago-based avant-garde chamber music group eighth blackbird (not “sixth” is right) have devoted their careers to combining contemporary music with elements of performance art, inviting collaborations with outside musicians. This approach has won the group three Grammy awards. They’ll take the stage at 8pm at UNT’s Winspear Hall, 2100 N I-35E, Denton. Tickets are $8-10. Call 940-369-7802.

Thur 12 – Dixie Longate was so popular when she came through town last January that she’s swinging back for another engagement. She’s leaving the Tupperware at home, though, instead performing Dixie’s Never Wear a Tube Top While Riding a Mechanical Bull (and 16 Other Things I Learned When I Was Drinking Last Thursday). The show runs Nov 11-22 at McDavid Rehearsal Studio, 301 E 5th St, FW. Tickets are $35-45. Call 817-212-4280.

Fri 13 – While the world of English-language theater reveres Molière, it doesn’t stage many productions of comedies by his contemporaries and successors. Stage West looks to redress the balance when the troupe puts on The Heir Apparent, a 17th-century farce by Jean-François Regnard about lovers trying to keep their elders from thwarting them. The play, a co-production with Theatre TCU runs Thu-Dec 13 at 821 W Vickery St, FW. Tickets are $17-34. Call 817-784-9378.

Sat 14 – The long march of the Texas high-school football playoffs begins this weekend with the bi-district round. The games will be going on in many cities around the state, but one of the venues will be AT&T Stadium. There’s no word yet on which teams will be facing off on the Cowboys’ home turf, but it’s sure to be a big occasion for the lucky contestants. The games run Fri thru today at 1 Legends Way, Arlington. Tickets are $10. Call 800-745-3000.

Sun 15 – Fall means a switch from light, refreshing beers to heartier ones, and Fort Worth Weekly rings in the change with its inaugural Homebrew Throwdown. Local and home brewers will provide you with their suds while you watch the Cowboys game, which just might make you need a drink. The event is noon-6pm at Panther Island Pavilion, 395 Purcey St, FW. Tickets are $10-15. Call 817-321-9700.

Mon 16 – Based on the 1954 movie musical that starred Bing Crosby, White Christmas is a stage play that incorporates many more Irving Berlin songs than the film had, including “Let Yourself Go,” “Blue Skies,” and “How Deep Is the Ocean.” Artisan Center Theatre will run this bit of cozy nostalgia all the way through the holiday season, so you’ll have plenty of time to catch it. The show runs Fri-Dec 22 at Belaire Theater, 420 E Pipeline Rd, Hurst. Tickets are $11-18. Call 817-284-1200.

Tues 17 – Classical music fans can get a rare treat in Dallas this evening when the Israel Philharmonic comes to town for one night only. They’ll perform Ravel’s shattering La Valse, Dvorák’s stirring “New World” Symphony, and A Journey to the End of the Millennium, a concert opera by the contemporary Georgian composer Josef Bardanashvili. The concert is at 8pm at Winspear Opera House, 2403 Flora St, Dallas. Tickets are $35-150. Call 214-880-0202.