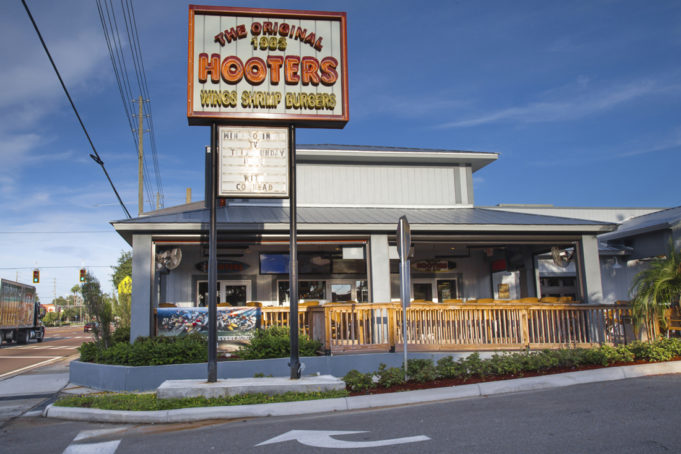 A group of locals led by Sundance Square creator Ed Bass is apparently trying to become the human embodiment of a big brassiere –– they’re trying to constrain Hooters! (Woh, woh.) A developer wants to bring the world’s most famous breastaurant to downtown, and some people reacted by creating a “Say NO to Hooters in Downtown Fort Worth” Facebook page. The group is distributing an online petition and rallying protesters to attend the city’s Downtown Design Review Board meeting at 2 p.m. Thursday in the pre-council chambers at City Hall, 1000 Throckmorton St.

The page claims downtown residents were not given proper notice and “have been intentionally deceived about plans for Hooters to occupy City Place Center II at 150 Throckmorton St.” The group says a realty group leased out the commercial space under an alias to prevent people from knowing a Hooters was on the way. “Because of these deceptive tactics, there was no opportunity for public input so that businesses and individuals could voice their concerns prior to TW Restaurant Holder … [a.k.a.] Hooters of America, being granted a liquor license through the TABC.”

A Facebook invitation to like the protest page came from none other than Stockyards businessman Steve Murrin. However, Murrin told Static that he doesn’t recall sending out the invitation. “I’ll go along with Mr. Bass,” Murrin said. “If he’s trying to keep his sensitivities on a little higher plane, that’s fine. Everybody goes [to Sundance Square] and enjoys supper and has a glass or two of wine, and they don’t really want a bunch of rowdies around. Not that everybody gets rowdy when they go to Hooters. I personally like going to Hooters, but I don’t mind going across town.”

Maybe the group should save its fights for strip bars and massage parlors. Calling Hooters a sexually oriented business is like characterizing a J.C. Penney catalog as a dirty magazine because of the underwear ads. The indisputable fact is that Hooters’ uniforms are no more revealing than those worn by waitresses at Ojos Locos Sports Cantina, which has been operating near Sundance Square since 2011, or the naughty schoolgirl outfits flying around downtown nightlife institution the Flying Saucer.

When asked about Ojos Locos, Murrin interpreted the Spanish phrase as “crazy eyes” but doesn’t recall ever visiting the sports bar. He’s been out of commission for awhile. The so-called Mayor of the North Side received quintuple bypass heart surgery six weeks ago and is just now starting to feel normal again. Doctors told him the surgery should serve him well for many years. He’s 77 now.

The bypass surgery is “good for 15 years,” Murrin said. “That’ll get me to 92. They’ll have something else by then.”

Murrin’s repaired ticker should guarantee him many more visits to Hooters for years to come, whether its downtown or not.

A six-month celebration of Larry McMurtry’s novel and TV miniseries Lonesome Dove kicked off recently with actors Barry Corbin and Barry Tubb appearing at the Lonesome Dove: The Art of Story exhibit at the Sid Richardson Museum. The exhibit runs through June 19 and features Western art and artifacts. Corbin, who portrayed the loyal but dimwitted Roscoe Brown in the miniseries, read an excerpt from the book.

And, well, the event went about as smoothly as the fictional trail drive that ended in the book’s favorite character, Gus, getting kilt.

Corbin read to entertain the crowd of about 100 who had piled into the downtown Western-themed art gallery, but the paragraphs included passages about shooting Mexicans. Some of the Hispanics in attendance took offense. One Hispanic man recently told Static that he realized the book was written about a different time in history but that a tome that thick surely contained some inspirational passages that didn’t involve killing Mexicans. “It wasn’t very nice to hear,” he said.

Static asked a museum official about the incident, and in short order we received a statement from Pete Geren, president of the Sid W. Richardson Foundation.

“I understand why those who contacted Fort Worth Weekly were offended, and I apologize,” Geren said. “The opening paragraphs from Lonesome Dove were read without explanation or any attempt to place the provocative passage in context. Throughout Lonesome Dove, the author described the virtues and vices of the characters he created, with their vices including biases and prejudices. The opening pages of Lonesome Dove are part of that narrative but, without context, understandably offensive.”

Geren said Corbin was not responsible for the selection.

“It was an oversight that the offending passage was included,” Geren said. “I was in charge of the event and take responsibility for that oversight. That text was out of place in a celebratory event of this type and should not have been included. Lonesome Dove, the novel and the miniseries, has contributed much to our understanding of our forebears, their strengths and their weaknesses, their virtues and their vices. I am pleased that Fort Worth was chosen to celebrate the history of Lonesome Dove, but my oversight is a reminder to be ever mindful of the importance of context and history in any reflection on our past and our present.”

If Jake Spoon had taken blame for his shortcomings and vowed to do better, maybe he wouldn’t have gotten hanged midway through the book.

A pivotal character in Fort Worth’s early rock ’n’ roll scene has climbed that stairway to heaven. LaVon “Ema” Rosenauer was 84 in 2014 when she told the Fort Worth Weekly that she fully expected to “live to be 105 and be shot by a jealous wife.” She didn’t make it. She died from complications of a massive stroke earlier this month at 86. Even as paramedics were loading her into an ambulance, she mumbled about having work to do –– an event organizer had called looking for entertainment. Ema didn’t have time for strokes and ambulances. She had a band to book. She died not long afterward in the hospital, squeezing the hand of her son, Duane, three times before taking her final breath.

Rosenauer opened Ema’s Enterprises in 1971 and began grooming and booking local rock bands, including Pantera, Texas, Lynx, Lo Della, Savvy, and Jamm. At the end of her life, Rosenauer enjoyed resurgence after 1.) being featured in the 2014 Weekly story “Godmother to Rock ’n’ Roll,” 2.) learning how to work Facebook, and 3.) posting the story on her page and being overwhelmed after hearing from many old musicians who still loved her dearly. Many of them will be attending the memorial service.

“When the story came out, it was such a beautiful thing the way it was written,” Duane said. “When mom got on Facebook she was getting these stories from all these musicians from way back when. I’d come in and catch her crying sometimes. They were giving back the love and respect. It was good for her mind and her spirit. It also made her do a lot of reflection. She had never really grasped that she’d made such an impact on people’s lives. Had [Prince] not been interested enough to write it, she wouldn’t have got on Facebook and she wouldn’t have had the second wind she got. It allowed her to have that last hurrah.”

Rosenauer’s longtime slogan –– “For the best in entertainment, you can depend on Ema” –– is still apt, because the best guitar player in town, Buddy Whittington, will perform at her memorial at 1 p.m. on Saturday, Feb. 6, at Keys Lounge, 5677 Westcreek Dr. Visitors are encouraged to donate $10 at the door to help cover funeral expenses. Rastus and The ToneMasters will also perform.