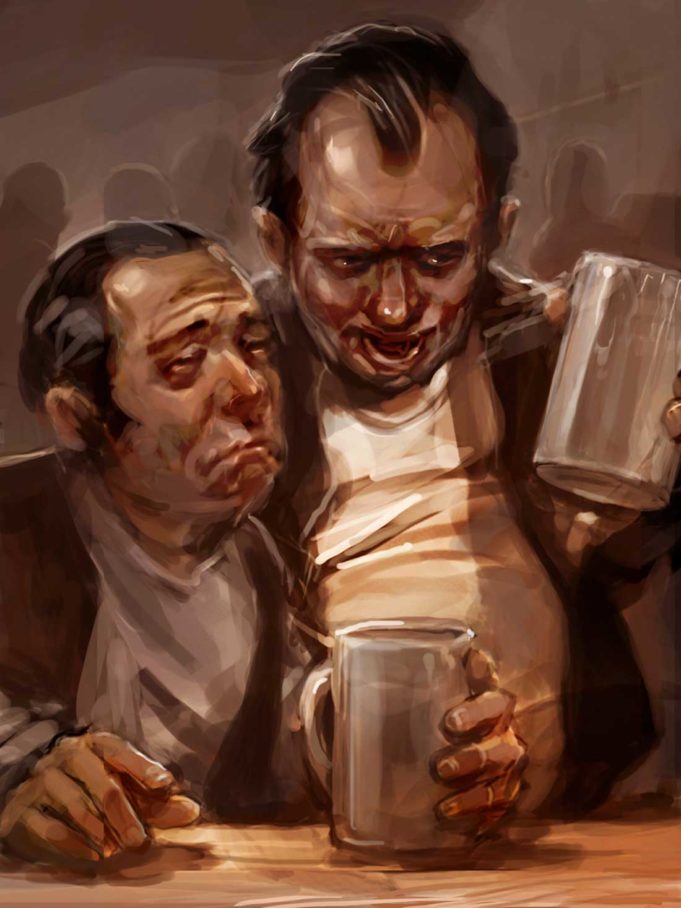 The obvious function of bars is to sell alcoholic beverages, but to me, that’s the least interesting part of them – it’s like saying the best part of a Lamborghini is that it gets you from point A to point B. Yes, of course, bars are great because you can buy liquor in them, but I think another function is to provide a venue for storytellers, bon vivants, and bullshitters of various quality to ply their trade. If there were no such thing as bars, the world’s drunkles (and whatever is the funniest portmanteau to describe drunk aunts) might never go home after Thanksgiving, and everyone else would be stuck hearing “I have this buddy” stories until the break of Black Friday dawn.
Of course, in the way that a Lamborghini’s ride is different from a Geo Prizm’s, the storytelling among bars differs with their clientele. That’s a nicer, lengthier way of saying that I think you hear better bar stories on the outskirts of town than you do in tonier neighborhoods, and that’s because blue-collar bars ultimately have more interesting drinkers.
Probably. My perception, that a Westside shooter-of-the-shit is superior to his or her counterpart in a different neighborhood is most likely because I spend more happy hours over there than downtown or on West 7th. But indeed, when I think of my all-time favorite bar tales, most have been told over a column of empty longnecks at a bar on Alta Mere or 377. Maybe it’s because the accents are a little thicker over that way or the audience is saltier, perhaps more willing to correct an embellishment, possibly with an even bigger one. I dunno. You can hear a long-time happy hour fixture’s throaty cackle anywhere, but to me, they sound better in 76116 than they do in 76104. Especially when the details they’re cracking up about are so unverifiable that they can’t not be true – these are the drunkle stories about the guy who took his clothes off and rode a horse into a bar, or a different guy who was bitten on the dick by a rattlesnake, or, how, back when said hypothetical drunkle lived in Las Vegas, he was personal friends of everyone from Bruce Lee to Evel Knieval, and how – if you can even believe it – he “sold a little dope” and then went to jail. It’s all amazing, and it’s all true. Right?
The 2016 answer is that it doesn’t even really matter if a story is true or not. We now live in an era when the unreliable narrator is king, or in a literal sense, President-Elect. And what that means for bars is that all bets for bullshit stories are off – the wilder, the better, I say. If you are (or someone you love has told you that you are) full of baloney, this is your moment in history to truly shine, especially if you are full of Shiner and are holding court in a dive.
I thought about these things after I’d been sitting at The Bucket, the traffic circle saloon that’s two doors down from The Dive Oyster Bar, listening to the guy go deep with the “back when” tales. He told a story about how, when he was in high school, this dude he knew dived headfirst into a shorebreak full of jellyfish. As if the guy’s agony wasn’t, well, agonizing enough, the class clown convinced him of the ol’ fish story about urine relieving the pain from the stings and then proceeded (with permission, apparently) to pee all over him.
That probably happened, or maybe it didn’t, but it kept me at the bar for another round. To all you happy hour bullshitters, may your drinks be doubles and may your tales always be tall.