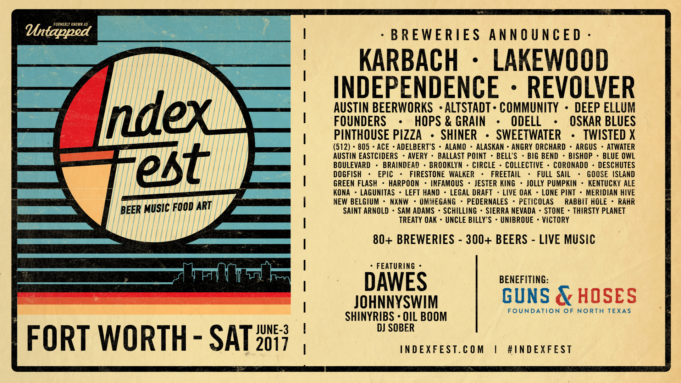 I’m yet to try summer beer. From what I’m told, it’s an inebriating mix of cheap beer, (presumably) equally cheap vodka, and frozen lemon concentrate. Despite the dearth of quality ingredients, it sounds like the perfect accoutrement to a lazy day in the pool or at the beach. I’ve aged out of boozed-up beer concoctions, but I’ve found other ways to enjoy craft suds in the summer.

Index Fest, formerly Untapped Festival, is one of only a handful of beer festivals that graces the 817 each year. I’m a longtime fan of the fest, mostly on account of the short lines and long tapwalls. Dallas-based Big Texas Beer Fest, while bigger, can feel like a Black Friday rush at times. This year’s Index Fest boasts more than 80 breweries, 300 beers, and several live acts.

Rounding out my local recommendations are Rabbit Hole Brewing’s Rapture and Keller-based Shannon Brewing Company’s Grapefruit IPA. Index Fest promises to have more varieties of grub and art vendors than past events did. As long as the beer selections keep up, I’ll keep coming back.