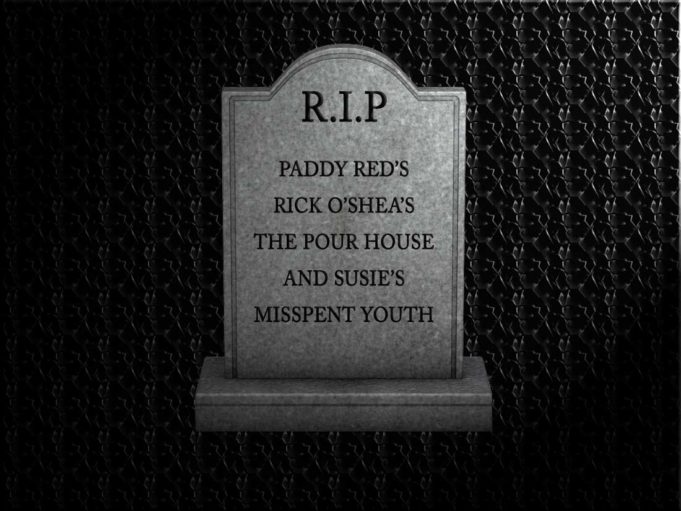 Not to be maudlin, but lately I’ve been thinking a lot about dying. I’m turning 40 in a week, but that is not causing me to dive headfirst into a mid-life crisis just because I realized my favorite t-shirt from college is old enough to legally drink. By the way, the tee was from the Urban Outfitters in Madison, Wisc., so suck it all you youngsters who think the West 7th store is some sort of sanctuary from your parents’ Generation X. (Pardon me while I shake my fist here and yell about staying off my lawn.)

In this case, though, the demise I’m considering is the closing of bars that defined a particular time period and attitude around Fort Worth. A few weeks ago, I took some friends who moved here from Austin and New York to downtown. We brunched at Taverna (450 Throckmorton St, 817-885-7502) before popping into the Silver Leaf Cigar Lounge (426 Commerce St, 817-887-9535) for a smoke. After, we listened to Josh Weathers playing in Sundance Square and sipped rosé from shady patio seats at Bird Café (155 E 4th St, 817-332-2473). There is little similarity to the way I would have spent this day while living downtown a decade ago, except the map coordinates. Were it not for my old building, Sanger Lofts, still holding down a full block of 4th Street, I could be in an entirely different town altogether.

Back then, my crew would walk across the parking lot to the Pour House for a hangover-curing brunch of nuclear-level-spicy huevos rancheros and Bloody Marys. The fact that the dance floor area was bowing and looked ready to fall into Mikado Sushi on the ground floor below was not a deterrent. Once the food-and-booze glue that repaired everyone was dry, we’d cruise over to Tobacco Lane for cigars and fine wine poured into red plastic cups, because the store had only a tasting license. Once the smokes were done, we’d shift to the old Flying Saucer space to play the board game version of Trivial Pursuit I’d schlepped over from my loft. Eventually, the bar hopping would conclude in either a couch spot in the lounge of Blade’s Chophouse or perched on a stool at Rick O’Shea’s or Paddy Reds.

Paddy’s closed late last year – and Rick O’Shea’s closed last week (pour one out for ’em) – putting two more tombstones up for the old downtown Fort Worth scene. Every one of those things I listed above is gone or significantly altered. Even though the beautiful Bird Café is in the same physical space as the original Flying Saucer, I would never think to stand on a rickety picnic bench and yell, “The answer is cold fusion, bitches!” after claiming victory over my trivia competitors like back in the day.

Trust me, this isn’t the result of my maturation as a person. The new downtown vibe is far too nice for any low-grade malarkey. It’s clean, safe, and chock full of nationally recognized restaurants and chic bars. This is not a bad thing, but I do inherently miss the time when locals and members of the service industry gave the area a true neighborhood feel and it wasn’t just a place to show tourists how cosmopolitan we are in Fort Worth. Maybe it’s time to do a health and welfare check on Malone’s Pub (1303 Calhoun St, 817- 332-5330) and Houston Street Bar & Patio (902 Houston St, 817-877-4727), as they may be the last ones still kicking from an almost bygone era.