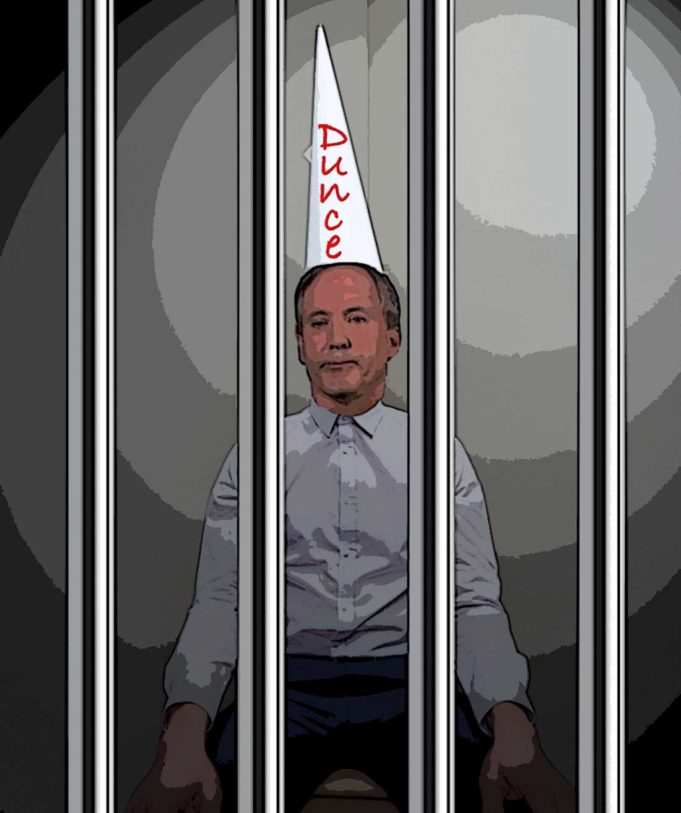 Where on Earth do we start with someone like Ken Paxton? You know, the Jeff Sessions of Texas and just as crazy. How about his rabid anti-abortion stance that’s killing women to save zygotes? Or what about his absolutely giddy cries of “rampant voter fraud” and then his persecution of a single woman who illegally voted five times in 10 years and was thrown in jail by him for eight years? Do we begin with his disregard of the U.S. Supreme Court’s decision on gay marriage and his announcement that it was all right to ignore that and not perform a gay marriage if you’re a Justice of the Peace and doing so goes against your religious point of view? Or do we begin with his repeated efforts to repeal Obamacare, all of which were predicated on his outright lies that the Affordable Care Act crushes the poor and elderly?

But there’s more. Should we go with his stance against non-gender bathrooms? Do we even dare touch on the fact that he’s facing 99 years for two federal felony counts of securities fraud in an upcoming trial? The man’s so full of fetid garbage, he’s a city rat’s dream.

Ah, yes, the Dream. On Monday, one of Kenny’s dreams came closer to reality. Leading a coalition of nine state attorneys general and a governor, Paxton recently threatened the Trump administration with a lawsuit if Obama’s executive order on Deferred Action for Childhood Arrivals, or DACA, was not phased out by Sep 5. Trump sort of obliged, saying the program that allows illegal immigrants brought here as children to attend school and work for renewable two-year periods if the kids keep clean records will begin to be phased out in six months. That gives the Dreamers six months to plan on what their deportation will mean – most of them were brought to the United States as small children and have no recollection of Mexico, Guatemala, or whatever other strife-clouded country where they were born. It also gives Congress six months to fix the utter stupidity of Trump’s decree, which has immediately turned the dream into a nightmare for the more than 800,000 people covered by DACA. More than 230,000 of them are our Texas neighbors.

None of this mattered to Paxton, who was happy to throw them under the bus, despite what it might mean to the Texas economy to lose the taxes these Dreamers were paying and the monies they were spending while going to school and working here.

“I applaud President Trump for phasing out DACA,” His Kennethness wrote in a press release immediately following the announcement of the program’s phase-out.

Paxton went on to tout his victory over former President Obama with regard to Deferred Action for Parents of Americans and Lawful Permanent Residents, or DAPA, a program that would have granted three-year renewable work permits to illegal residents who were the parents of U.S. citizens or green card holders.

A favorite excuse of Paxton’s – and most Republicans’ – is that illegal immigrants are taking American jobs. Oh, really? A family member who once owned a small painting company said he would have loved hiring some young, able-bodied white people – if any of them would have ever bothered to apply. We guess they were too busy trying to be the next Tony Romo or Instagram celebrity. Or playing Call of Duty.

Way to keep it real, Kenny P. Way to make America white again (#MAWA) while making most of us sick. Good luck with your upcoming trial. And we mean that facetiously. We hope you rot in jail.