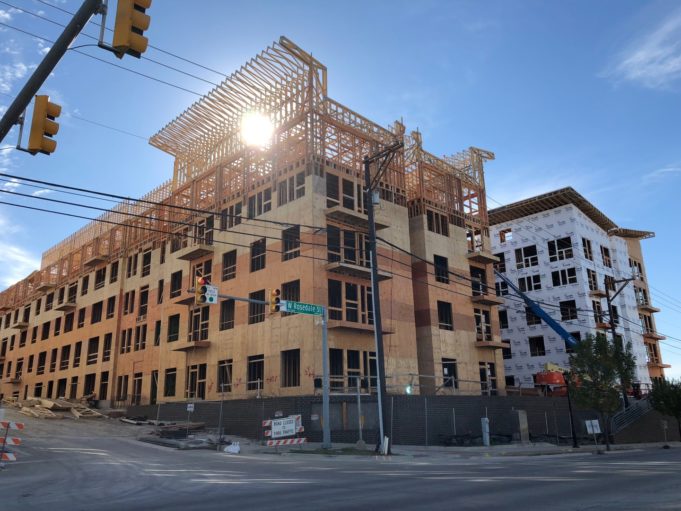 If you’ve spent any amount of time around Magnolia Avenue in the last few months, you’ve likely noticed the large buildings going up just to the north of the street on blocks bounded by Oleander Street, Fairmount Avenue, Rosedale Street, and Hurley Avenue. The multistory infill apartment developments that have been happening around the central city are settling into Magnolia Urban Village, and this particular project has advanced to the point where we can now have a good idea of what it will look like once completed.

Dubbed “The Monarch,” possibly a reference to the butterfly roof design used along the Rosedale and Oleander frontages, the development takes the form of four five-story apartment building wings encircling a central parking garage. The wood-frame construction is covered by a mixture of dark brick and cream-colored panels topped by those angular roof sections. It’s solely an apartment building –– there’s no retail or other sort of uses along the street.

The Monarch will bring 322 units to the Near Southside, a part of town that always has high apartment occupancy rates. It will have all the sort of amenities you would expect from a modern-day high-end urban apartment development, including a large pool, multiple courtyards, and the like. 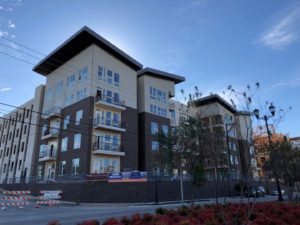 As it approaches completion, the Monarch looks to be a fine-looking development, and has a commanding presence when your approaching from Rosedale Street. It’s not nearly as busy and confused as a design as many of these large projects can be, as I talked about in a post here in 2015. Modern infill apartments often fall into the trap of trying to cover up their size by breaking up their facades into a multitude of squares and rectangles of varied color and material, making them feel garish and jumbled as a result. Better designs feel calm and more coherent, and the Monarch feels more like a whole concept compared to some other recent projects.

My biggest problem with the development comes not from a strictly architectural perspective, but from the way the project treats its Rosedale Street frontage. There’s an elevation change from Oleander Street to Rosedale, which was exacerbated when the Texas Department of Transportation widened Rosedale into an overbuilt, barren state highway some years ago. At the time, a large concrete retaining wall was built along Rosedale, which makes these blocks feel unwelcoming and dead.

I had hoped that when a development went in at this site, something would be done to remove that wall and reactivate the street. In fact, a previous mixed-use development proposal had intended to do just that, accommodating the elevation change with an underground parking garage and a mixed-use building at Rosedale and Hurley Avenue that would add ground-floor retail and make Rosedale a livelier, more attractive place again. The Monarch, though, keeps the retaining wall situation in place, with the apartments perched atop the wall above street level. The blank concrete has been replaced with dark brick that matches the apartments, but it’s still an empty wall that will deaden the pedestrian experience.

I understand the money that would be involved with a design like that of the originally proposed development. Dealing with elevation changes in such large projects always adds to the design and construction cost. Keeping the walls is understandable from a budgetary perspective, but it’s a disappointment from an urbanism point of view. If nothing else, such a large, empty canvas seems to be calling out for a Fort Worth Public Art installation of some kind, and it doesn’t take much to imagine the walls hosting a painting or sculptural element at some point in the future.