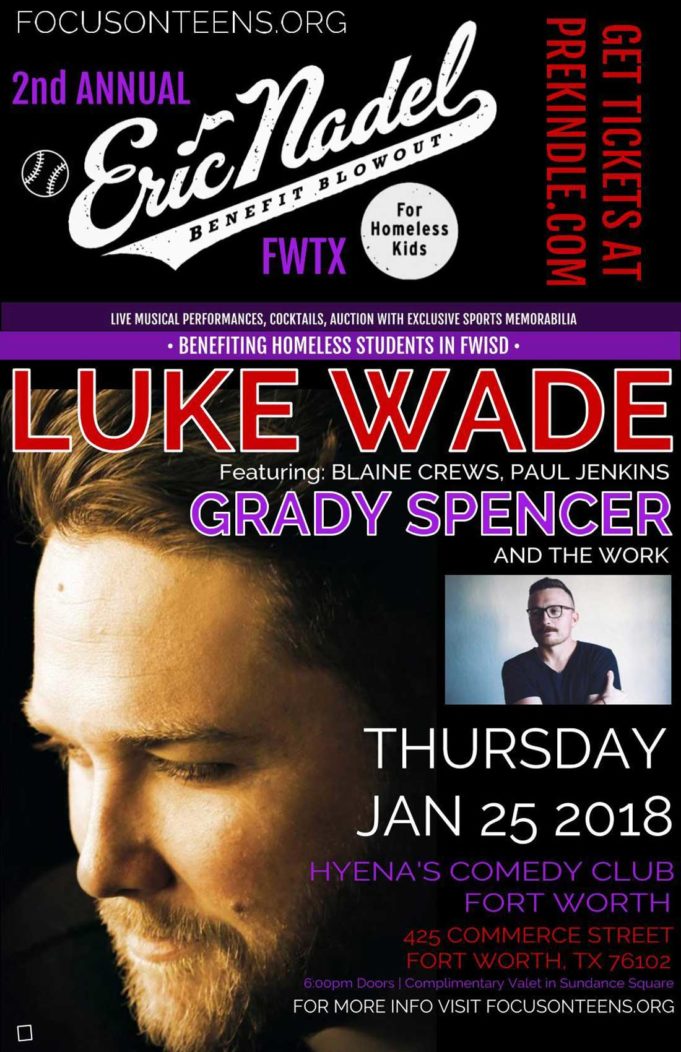 I know it’s an ironic buzzkill to weigh in with a sobering thought in a column about drinking and night-light party zones, but here it is anyway: There are about 3,000 homeless kids going to school in the Fort Worth school district. That number is grim in the abstract, but if you take a moment to reflect on all the stressors a person experiences in junior high and high school, you’ll (hopefully) recall that being a teen is already hard, even when you have a house to return to after the last bell has rung. Add homelessness into a young person’s life, and the odds against graduating and enjoying a healthy and successful adulthood increase by a depressingly daunting number.

You can use your imagination to see the various dead-end paths that yawn open for kids on the street –– my imagination worries about their potential for alcoholism and other drug abuse. But there’s hope.

Focus on Teens is a Dallas-based charitable organization that strives, according to its website, to “compassionately serve the marginalized teen.” Though it originally served Dallas, the nonprofit expanded to Fort Worth last year with the help of none other than the voice of the Rangers, Eric Nadel.

“What they do is provide drop-in centers where the kids can come early to school, hang out, do homework, get school supplies, or get food,” he said.

The charity offers four focus areas for students dealing with homelessness: emergency food and supplies, the afore-mentioned drop-in centers, drug abuse prevention and awareness, and an intern program called Get Started Mentoring. When Focus began offering services to the Fort Worth school district in 2017, Nadel lent his support by hosting a benefit concert for the organization at Shipping and Receiving that featured an auction and performances by Josh Weathers, Daphne Willis, and The Hendersons.

This year, the second annual Eric Nadel’s Benefit Blowout is slated for 7pm on Thu, Jan 25, at Hyena’s Comedy Club, whose owners are donating the use of the space for the night. Nadel will emcee full-band sets by both Luke Wade and Grady Spencer and the Work. Wade has been a fixture in Fort Worth’s music scene for over a decade, but he’s probably best known for his stint as a contestant on NBC’s The Voice. Another local stalwart, Spencer has played his music all over the airwaves and local venue stages.

As for this year’s auction, the items up for grabs include collectible sports memorabilia, as well as celebrity dinners with Nadel and other local famous people. Last year, the biggest auction ticket was a dinner at Heim Barbecue with Nadel and Rangers great Tom Grieve. Nadel kept this year’s auctioned-dinner celebrities a surprise, but whoever they are, you’ll have the chance to score a truly unique gift for yourself or a baseball fan in your life.

Nadel said he was looking forward to hearing Wade and Spencer in Hyena’s intimate setting, but as excited as he is about the bands –– he said he’s a big fan of Spencer, calling him one of his local favorites –– he is even more passionate about the charity itself. He’s been the spokesman for Focus on Teens for the past three years.

“The kids who go to the school and use the program have a high rate of graduation,” he said. “It’s kind of an under-the-radar program, but it’s starting to get more attention and grants.”

Tickets are available at the door and on Prekindle for $28, which, if you ask me, is a small price to pay for a worthwhile investment in the futures of kids who are at a precarious point in life. In the parlance of baseball, attending this benefit show will drive in a lot of runs.  And if you can win an evening hanging out with Eric Nadel in the process, that’s pretty much a grand slam.