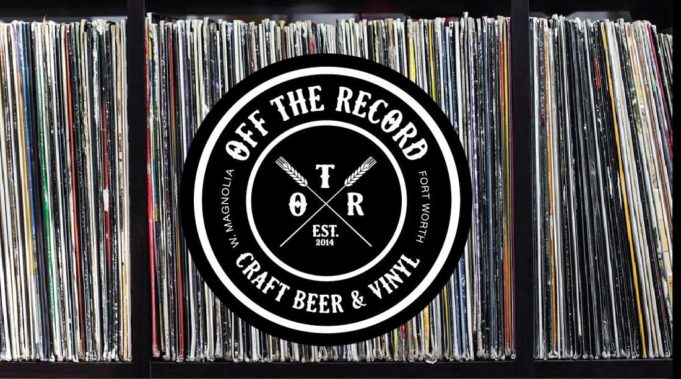 Not to come across like a curmudgeon, but I’m opposed to drunk shopping. When Target was toying with the idea of letting you tote around a glass of wine while browsing the aisles, I thought it was a sharp way to turn a Liquid Drano run into a $500 artisan nut-buying spree, and I silently opposed it.

Thanks to the mostly mind-numbing reading I’ve done in behavioral economics for my day job, I know using liquor to dissolve a consumer’s budgetary resolve is just good business. Lower inhibitions and add in the instant gratification factor, and, like turpentine on old paint, the money holder is soon stripped of his or her coverage.

These basic rules of human psychology and finance slyly collide at the new Magnolia Avenue bar and vinyl hybrid store, Off the Record. Last Monday evening, I walked into the warm, inviting brick-walled space that was brightly lit for 9pm on a school night. The bartender happened to be Steve Steward, current Weekly contributor and author of this column for years before I came along, which made it even more like just grabbing a drink at your friend’s cool urban digs.

When you are standing at Off the Record’s drink rail, nothing screams “retail music store.” I worked in a strip mall Musicland in high school, and the pungent scent of teenagers coated in Drakkar Noir clutching UB40 CDs in their sweaty hands will never leave my olfactory memory. But there isn’t a lot of stock in vinyl inside Off the Record as of yet, and what is there is discreetly tucked along the back wall near the restrooms. The bar runs down the opposite side of the building from the merchandise and features a back wall of beer taps and a nice selection of libations.

After ordering a round or two of drinks for our table, I discovered the secret genius behind the placement of those records. After you’ve tipped back a few, you must hit the water closet. I emerged from the ladies room and walked straight into the sightline of something I didn’t need but sure-as-shit wanted: a 180-gram vinyl press of Paul McCartney & Michael Jackson’s 1983 collaboration “Say, Say, Say.” I still have my original copy of this on 45, and I used to play it regularly while thinking about the epic feud that was to come between Sir Paul and the Gloved One. Honestly, I haven’t heard it in years. Also, my record player was mortally wounded in my recent move, so I don’t even have a place to play the damn thing at the moment. But after a few Jamesons, I didn’t see how either of those two points was valid enough to not just add it to my tab, along with whatever else was a hot track from my kindergarten playlist.

This is where booze halls with shops in them are so dangerous. I’m not a sucker for fancy handbags or fine jewels, but if you stick me in a book or record store after a few cocktails, I’ll make it rain like I’m Fort Worth’s short, white, blonde, female, middle-aged answer to Kendrick Lamar.

Luckily, before I just started tossing random things across the bar at Steve to bag up, I had the sense to go back to the table, sit down, and do a personal inventory of why I needed this particular thing so much. Then I put it out of my head and ordered another drink instead. Time will tell if I fight Off the Record’s temptation on my next visit, but I wouldn’t bet my discretionary budget on it.