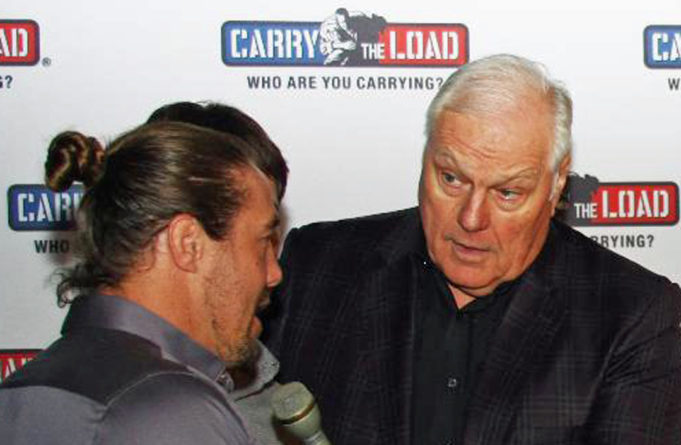 When a television personality speaks to us every night electronically, we often feel like we know that person.

Thanks to the various jobs I’ve tried to hold down over the years, I do actually know a lot of those folks. Longtime WFAA sportscaster Dale Hansen isn’t one of them.

He and I have been in the same place many times, at press conferences or charity golf tournaments, but we’ve never had sustained interaction. Still, through the combination of observing him at such events and watching and listening to him on the air, one can feel as though one has some idea of what he’s about.

We found ourselves in the same spot again Thursday. As Hansen and Channel 8 colleague Pete Delkus served as co-emcees of the Carry The Load kickoff event, I sat on the balcony looking to ensure all the slides and videos played properly.

For most of the show, he was the Dale Hansen I thought I knew. He was, as he always is in such situations, a politically incorrect, unfiltered, loose cannon. He made jokes about Navy SEALs beating up people who kneeled for the national anthem. He bashed the Rangers (the baseball team, not the army unit or Texas law enforcement agency – even Hansen might show some modicum of restraint at a benefit for a charity serving military and law enforcement causes). Hansen badgered Delkus and even dogged his station’s recently retired general manager.

He tricked an auction bidder into raising a bid with an empty guarantee of victory. He apparently big-timed the lady serving the barbecue. He made jokes about Republicans bankrupting the government via tax cuts in one breath and Democrats confiscating all the citizens’ money through taxes in the next. And, as we might expect, the veteran performer made my job easier by hitting all his cues.

And then, at the end of the night, this bombastic, sarcastic mudslinger did something I never expected.

Carry The Load serves veterans of the military, first responders, and rescue personnel through awareness efforts, a continuum of care, and education. The program Hansen and his colleague hosted kicked off the organization’s Memorial Day initiatives, including a nationwide relay. A powerful moment came toward the end of the presentation, when Sydney Mulder described the events leading to her husband Bill’s suicide. Members of Bill’s platoon surprised her with an on-stage reunion. Carry The Load hopes the Mulders’ story will help others in similar situations. Her narrative moved everyone in the room, including Mr. Hansen.

When he spoke from the podium again, he told his own poignant story. Hansen served in the U.S. Navy himself, though he downplayed the quality of his own service. His best friend ended up in Viet Nam. At the age of 18, Hansen’s buddy was killed there. The memory clearly remains vivid in the sportscaster’s mind, as does the disrespectful reception many soldiers received when they returned home after serving in South Asia. Hansen wiped away tears as he recounted the details.

As noted earlier, I don’t really know Mr. Hansen. What I do know, from having worked in sports for many years, is that a lot of times you may think you know someone’s mind because you’re familiar with his or her public persona. You probably don’t. Over the next month and a half, Carry The Load will raise awareness of a number of stories and sacrifices. Thursday, they revealed a side of Dale Hansen many people, including me, hadn’t seen before.